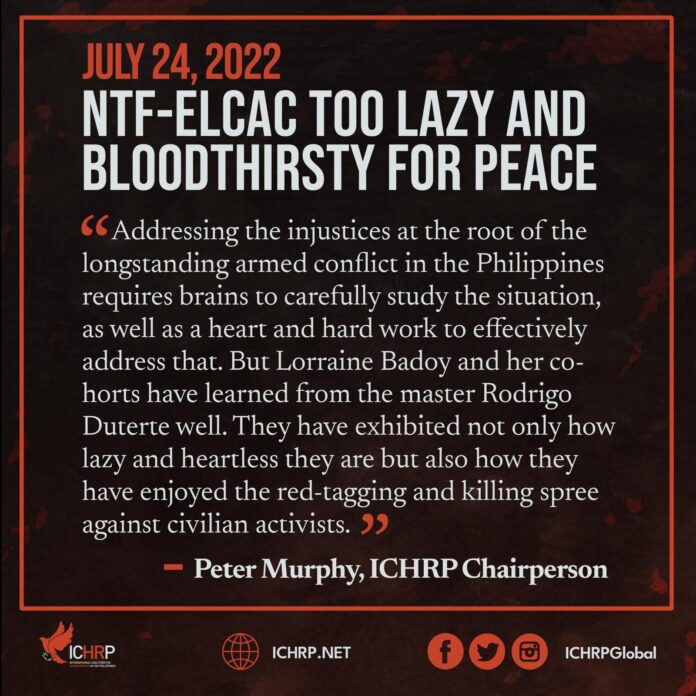 The International Coalition for Human Rights in the Philippines (ICHRP) is not surprised that the NTF-ELCAC is recommending against peace talks to the Marcos administration. “Addressing the injustices at the root of the longstanding armed conflict in the Philippines requires brains to carefully study the situation, as well as a heart and hard work to effectively address that. But Lorraine Badoy and her cohorts have learned from the master Rodrigo Duterte well. They have exhibited not only how lazy and heartless they are but also how they have enjoyed the red-tagging and killing spree against civilian activists,” said ICHRP Chairperson Peter Murphy.

Previous peace talks have broken down because of the government’s lack of political will to pursue peace and sustainable development based on truth and justice. All the government wanted was for the New People’s Army to lay down their arms without resolving the roots of the armed conflict and implementing genuine agrarian reform and national industrialization. All the government cared about was to continue trampling on the people’s rights and plundering their communities. The contrived localized talks and granting of amnesty and payments to “surrenderees” are convenient for them because they corrupt these payments instead of really spending for genuine, sustainable development for all. This approach has not addressed the root causes of and will only prolong or make the conflict a vicious cycle.

We reiterate our support for the new National Security Adviser Dr. Clarita Carlos’ call of doing away with the Duterte-Badoy NTF-ELCAC’s lazy, impatient, and blood-thirsty approach to ending the conflict. Let us all remember that the conflict remains because abuse, exploitation and oppression of the majority by the elite and their foreign masters remain and intensify. We urge Dr. Carlos and the Marcos administration to opt to work hard and smart – that is, to genuinely deliver social justice to all the marginalized and oppressed, which necessitates national-level peace talks.