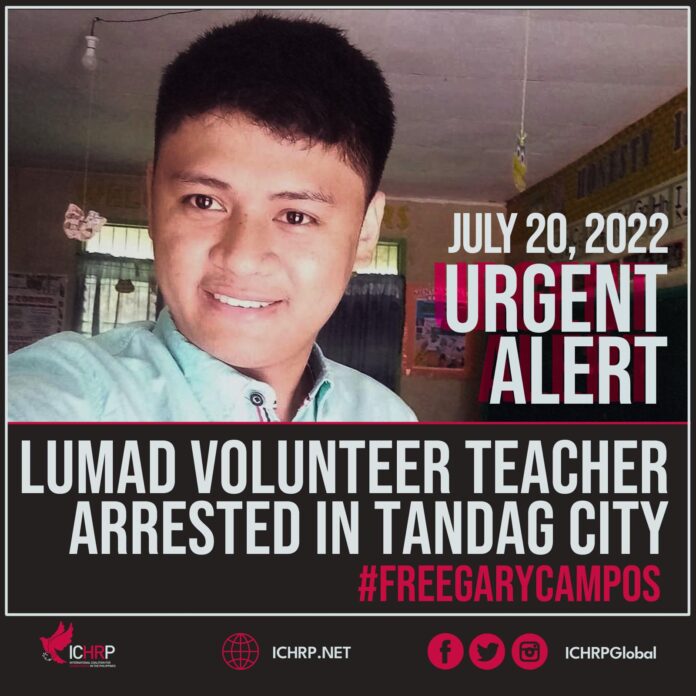 Update as of July 21, 2022: the family was able to see Gary. He was brought to court at Bayugan branch for a trumped-up charge of attempted murder, but brought back to Butuan. A bail of P120K was recommended. If the bail is not paid within one week, he’ll be transferred to Bayugan Jail.

The International Coalition for Human Rights in the Philippines (ICHRP) denounces the arrest of Gary S. Campos, a volunteer teacher of a community school in Tandag City, Surigao del Sur on Sunday, July 17 at around 1 pm.

Campos was on his way to a teacher’s licensure exam review center when he was arrested by members of the Philippine National Police – Caraga.

At around 8 pm of the same day, he was allowed to make a call to some friends to inform them that he was detained at the Butuan City Police Station. Campos told friends that he was presented a warrant of arrest for an unknown case.

Campos is a Lumad-Manobo who graduated from the Tribal Filipino Program of Surigao del Sur (TRIFPSS) and the Alternative Learning Center for Agriculture and Livelihood Development (ALCADEV). He graduated with an education degree at the St. Theresa’s College-Tandag. After graduation, he volunteered as a teacher for TRIFPSS. Campos is also a member Malahuyatong Pakigbisog Alang sa Sumusunid (MAPASU), a Lumad organization at the forefront in defending the Andap Valley Complex against foreign large-scale coal mining.

This alert will be updated as soon as information is available.