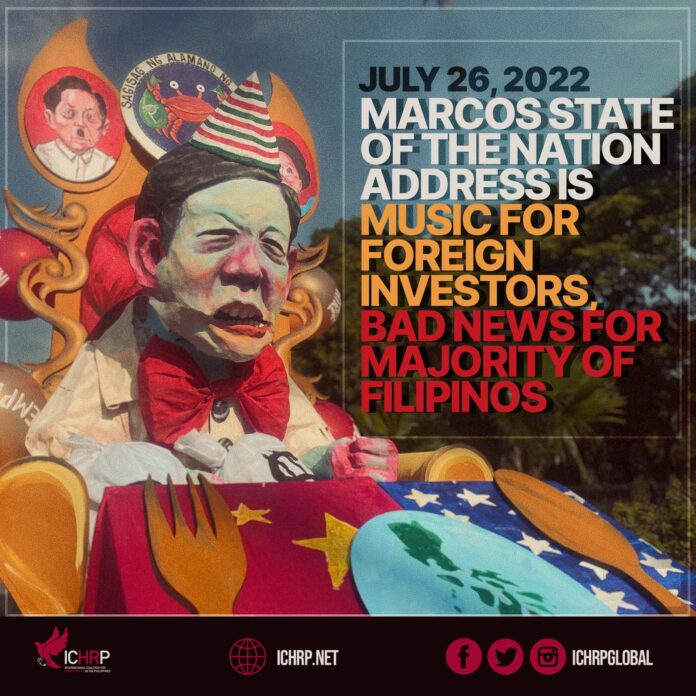 “The People’s State-of-the-Nation street rally yesterday told the incoming Marcos Presidency that the real problems to address are the skyrocketing prices of goods and services, the hell-like traffic gridlocks, rapidly declining value of the Peso, almost weekly increase in the prices of fuel, million-dollar foreign loans, declining real wages, massive landlessness and poverty, intensifying natural disasters, and corruption in government agencies,” said Peter Murphy, Chairperson of the International Coalition for Human Rights in the Philippines (ICHRP).

“What we have seen thus far is Marcos’ secret vacation to Australia, the luxurious exclusive victory parties with the oligarchs, and a grand movie project to repackage the Marcos family as victims and the Filipino people as – in the words of its creator – the ‘thieves of power’ – all amid the very pressing hardships faced by their citizens,” he added.

In his first State-of-the-Nation Address (SONA), Ferdinand “Bongbong” Marcos Jr. had no qualms in repeating the economic policies of his predecessors, promising to extend the VAT to digital services which will hit the poor, to liberalise foreign investment, promote more special economic zones, and expand the Public Private Partnership system – all opportunities for the oligarchs and his selected cronies to further plunder the coffers of the nation and squeeze consumers of public services.

Marcos Jr. paid lip service to the climate crisis, but promised to expand natural gas use and even build nuclear power stations!

He made no mention at all of human rights. “This is not surprising especially with his father’s – Ferdinand Marcos Sr. – notorious record of Martial Law and human rights violations. This means that the climate of impunity continues, a very dangerous situation for the Filipino people. There’s a pressing need for the international community to increase their vigilance and action,” Murphy warned.

“Marcos Jr and his family have long waited for this moment to be back in Malacañang. If they had a sincere desire to serve the Filipino people they would have long ago put forward sound, realistic proposals and mobilized significant amounts of their own wealth to invest in the various government posts that they have held.

“We from the international community extend our solidarity to the people who yesterday exercised their right to peaceful assembly to show the true state of the nation. We urge the dictator’s son not to follow his father’s cruel and bloody footsteps, and instead to work with his critics and the Filipino people’s movements who do have realistic, specific proposals to help solve the pressing problems of the Philippines to achieve just, peaceful and genuine development,” Murphy concluded.