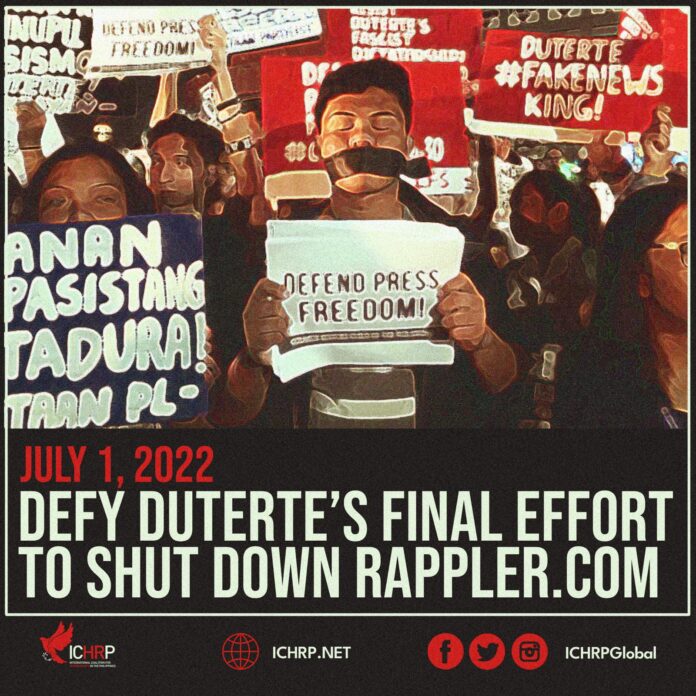 “The International Coalition for Human Rights in the Philippines (ICHRP) joins the global chorus condemnation of Rodrigo Duterte’s 11th hour effort to close down Rappler.com. This is another serious violation of civil and political rights. We salute Rappler CEO Maria Ressa and her staff for defying the shutdown order,” said Peter Murphy, Chairperson of the ICHRP Global Council today.

“Duterte is having his last-minute revenge against critics, and appears to be locking in the incoming administration to ever harsher repression. We call on the new administration to cancel these orders and to stop the red tagging of critics, fake charges, long detentions without trial and extrajudicial killings,” Murphy said. “The 700 political prisoners, starting with Senator de Lima, must be freed”.

Next day, Maria Ressa, Nobel Peace Laureate, said, “We have been harassed, this is intimidation, these are political tactics and we refuse to succumb to them.” Rappler’s lawyers initiated an appeal and Rappler has continued to publish.

The latest attack on Rappler, as well as the attacks on Bulatlat.com and Pinoy Weekly, were condemned by the National Union of Journalists of the Philippines (NUJP), saying these plunged the country’s media into uncertain waters.

The International Federation of Journalists called for the blocking of news websites in the Philippines to stop.

The Philippines now ranks 147th out of 180 countries on the Reporters Without Borders (RSF) press freedom index. In 2020, ABS-CBN, the largest network, was ordered to cease free-to-air operations after it was denied a new broadcast license, and now relies on an internet platform.

Duterte reacts personally to criticism of his policies, especially the war on poor people in the guise of a ’war on drugs’, and both ABS-CBN and Rappler have been consistent critics. Senator Leila de Lima has been jailed on fabricated charges for five years because she challenged this policy from the start.

Ressa has faced 10 arrest warrants since 2019 and is appealing a conviction for alleged cyber libel that has a six-year jail sentence. “This legal warfare against Maria Ressa, and against all civilian critics must stop”, Murphy concluded.