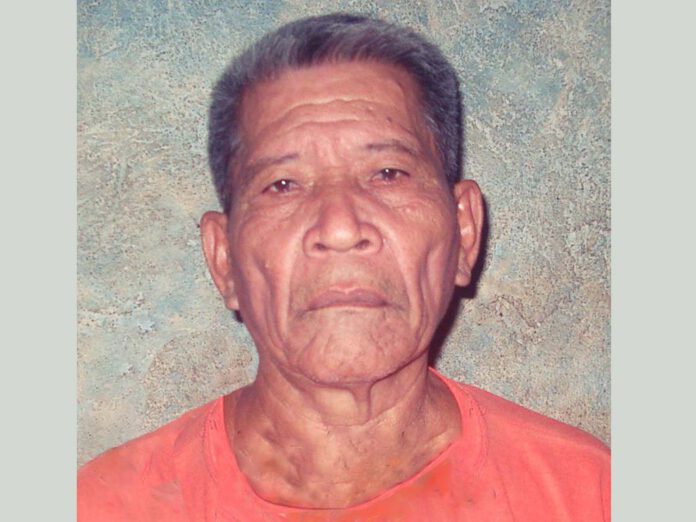 It is with sadness this week that the International Coalition for Human Rights in the Philippines (ICHRP) marks the passing of political detainee Jesus Alegre, aged 75. Alegre died on June 13 at the Ospital ng Muntinlupa after being in and out of the hospital with diabetes and other ailments over the past few months. Alegre had spent the last 16 years of his life in the notorious New Bilibid prison in Muntinlupa where the mortality rate among the overcrowded prisoner population is said to be 20% per year.  Alegre, his wife Moreta, and his son Selman were all wrongfully convicted of murder in 2005.

The Alegres are a family from Sagay, Negros Occidental, they had seven children.  Before their incarceration, they were simple fisherfolk and did farming on their small landholding when not fishing. The family were members of Pamalakaya, Negros (National Federation of Small Fisherfolk in the Philippines).

Jesus and Moreta were arrested in April 2005, along with their son Selman. Their imprisonment was a result of a land dispute with a local landlord, Avelino Gaspar, who was encroaching on their small plot of land. The Alegres filed a formal protest to the Bureau of Lands which stopped Gaspar from gaining title to their land, and this caused serious friction between the two.  The dispute lasted over several years and resulted in the death of one of the Alegre sons while trying to protect their land.

Despite the ongoing harassments and threats from Gaspar, the Alegres refused to leave their land and attempted to fight the landlord through the courts. Unfortunately, one of the landlord’s men was killed by an unidentified individual and the Alegre family were accused of murder and found guilty. The main witness to the presumed killing was Gaspar, the landlord.

The couple spent four years at the Sagay Prison in Negros Occidental and then transferred to Metro Manila where they were separated.  Jesus Alegre reflected poignantly on their incarceration, “We are made to suffer for sins we did not commit. It’s because we do not have money and power and we just want to live simply tilling our small land so we can live. Where is justice? We lost our son Romeo trying to defend that small piece of land. When he died no one ever seek justice for him. Our family just cried in silence. I know this was their way of getting rid of us in that small piece we were tilling. But his death was not enough. Our whole family had to take on the cudgels of prison life.”  By eliminating the entire Alegre family, the question of land ownership was resolved for Gaspar.

The Alegres’ conviction and long prison sentence are an example of the failure of the Philippine justice system to provide protection for the poor and oppressed of Negros.  The refusal of the Duterte regime to grant any sort of relief to these aging and sick inmates despite repeated requests during the Covid Pandemic is testament to their barbarity.  ICHRP Global Chairperson Peter Murphy notes: “Jesus Alegre had committed no crime; his imprisonment is a monument to the injustices of the judicial system in the Philippines.  Political detention continues to be an instrument of state terror!”