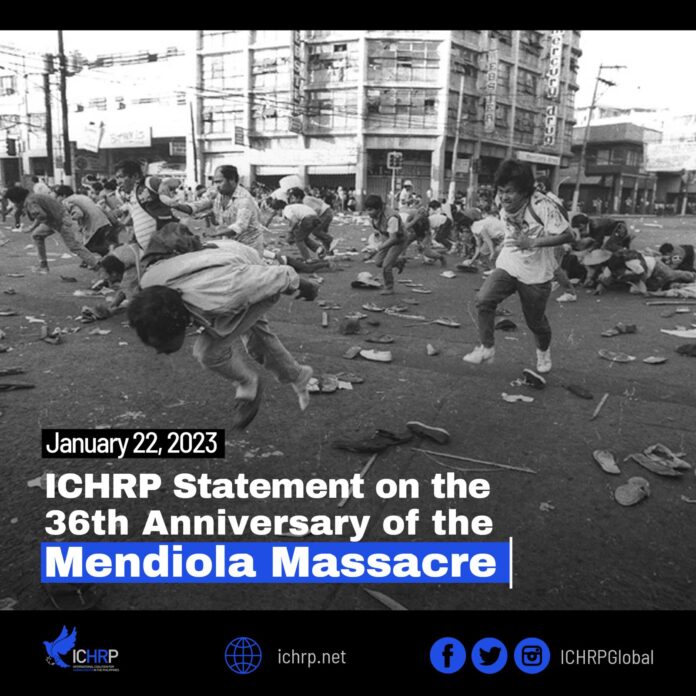 “The International Coalition for Human Rights in the Philippines (ICHRP) today marks the 36th anniversary of the Mendiola massacre, a brutal attack by state forces against peasant farmers on January 22, 1987,” said Peter Murphy, ICHRP Chairperson.

“In the context of the ongoing struggle for land reform under the administration of Corazon Aquino, over ten thousand farmers joined protests outside of the Department  of Agrarian Reform and demanded action on the fair distribution of land to all. They then marched toward Malacanang Palace, and thirteen were killed when soldiers opened fired at the Mendiola Bridge: Danilo Arjona, Leopoldo Alonzo, Adelfa Aribe, Dionisio Bautista, Roberto Caylao, Vicente Campomanes, Ronilo Dumanico, Dante Evangelio, Angelito Gutierrez, Rodrigo Grampan, Bernabe Laquindanum, Sonny Boy Perez, and Roberto Yumul.

“Today, more than three decades after this horrific injustice, the peasants’ demand for land reform still goes unanswered,” Murphy continued. “Millions of farmers across the Philippines remain landless, and are forced to pay exorbitant land rents to produce. The military continues to threaten and kill peasants  who defend their right to till the lands and struggle for their basic rights – peasant communities even face shelling and bombing under the guise of ‘counterinsurgency operations’.

“ICHRP amplifies the call for genuine land reform and respect for the rights of the farmer across the Philippines. We also call on the international community to support this struggle by raising political or material support for peasant organizations in the Philippines, such as the Kilusang Magbubukid sa Pilipinas. The anniversary of the Mendiola Massacre reminds us that the struggle for justice is as important as ever.”