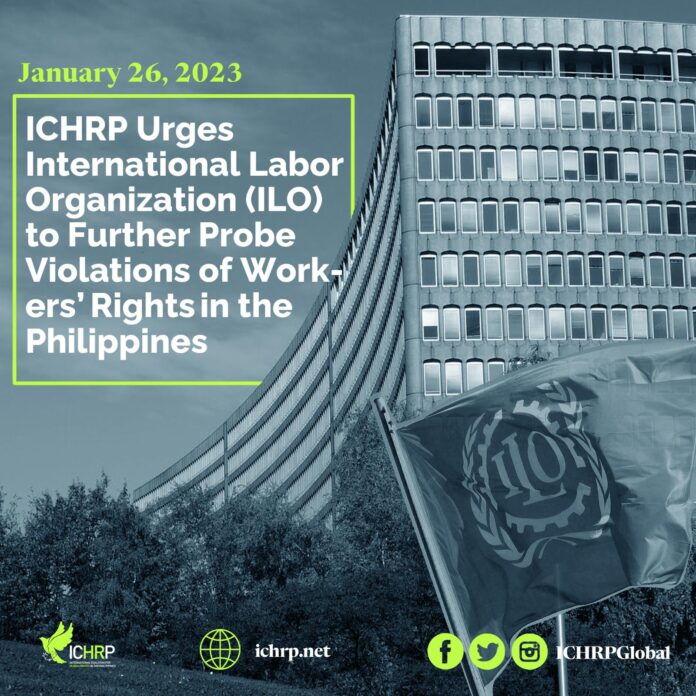 “The ongoing Mission of the ILO is in line with one of INVESTIGATE PH’s key recommendations in all its three reports submitted to the UN OCHR, the ICC and the ILO. It is high time that the Philippine government is made accountable for its gross violations of workers’ rights, which heightened during President Duterte’s term,” said Peter Murphy, ICHRP Chairperson.

Formalized in June 1948, the ILO Convention Nos. 87 and 98 unequivocally declares the “freedom of association and right to organize” of all workers in the world, which the Philippines ratified in 1953. These rights are also stated in the International Covenant on Civil and Political Rights as well as in the International Covenant on Economic, Social and Cultural Rights and the Universal Declaration of Human Rights where the Philippine government is a party to these conventions.

Despite having it ratified in 1953, the Philippines has a poor record of implementing the ILO Convention No. 87. Under President Duterte’s administration alone, 56 labor leaders and organizers were killed, while hundreds were victims of various cases of red-tagging, harassment, union-busting, and arrests due to trumped-up charges. Among these incidents is the Bloody Sunday Massacre on March 7, 2021, which killed 9 activists in Southern Tagalog. One of the victims was labor leader Emmanuel “Manny” Asuncion, who was then in the office of Cavite Workers’ Assistance Center, Inc. (WAC) when state armed forces forcibly entered the office, tortured and killed him. The Department of Justice in a Resolution recently dismissed the criminal complaint filed by Asuncion’s wife against Philippine National Police (PNP) personnel for “insufficiency of evidence”, concluding that there is no probable cause to prosecute them for the killing of Manny Asuncion. This further exacerbates the climate of impunity and the continued delay in giving justice for victims of state violence.

“Equally alarming is the practice of the Philippine government in repressing the right of workers to organize and form trade unions. The creation of the National Task Force to End Local Communist Armed Conflict (NTF-ELCAC) has aggravated the disrespect of this right by the government,” added Murphy. They red-tag, threaten, file trumped-up charges, arrest and detain, and kill union leaders and organizers. The Alliance for Industrial Peace Program formerly known as Joint Industrial Peace Concerns Office (JIPCO) sees workers’ collective action as ‘terrorism’ and makes organizing of workers into trade unions very difficult especially in export processing zone areas.

The workers’ situation has not improved since July 2022 under Marcos Jr. The Minimum Wage in the National Capital Region (NCR) remains at a measly P570 (US$10.44) per day, while other provinces like Bicol have it significantly lower at P335 (US$6.14) per day. Meanwhile, the real wage of workers in NCR is at P488 (US$8.94) per day, a far cry from the family living wage of P1,117 (US$20.47) per day, based on August 2022 data. Coupled with the fast-rising inflation and the continued crackdown of labor rights in the country, the problems faced by Filipino workers seem to have no end in sight.

As the ILO Mission concludes on January 27, ICHRP implores the ILO to urgently come up with the necessary recommendations to put a stop to the killings and repression of workers in the Philippines. “ICHRP reiterates its call to have the Philippine government abide by international labor laws and to be held accountable for its blatant disregard and violations of workers rights,” concluded Murphy.