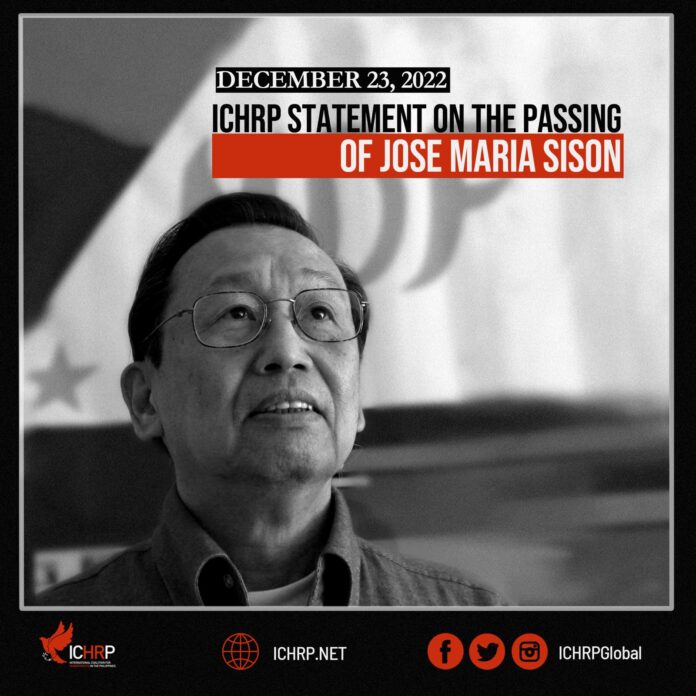 The International Coalition for Human Rights in the Philippines (ICHRP) joins the international community in grieving the sudden and unexpected passing of Jose Maria “Ka Joma” Sison. He died at the age of 83 last December 16 after being confined for two weeks in a hospital in Utrecht, The Netherlands.

He was the founding Chairperson of the Communist Party of the Philippines (CPP), the Chief Political Consultant of the National Democratic Front of the Philippines (NDFP) Peace Negotiating Panel, and Emeritus Chair of the International League of People’s Struggle (ILPS), which he also helped found in 2001.

“Sison was a patriot and a staunch fighter for the comprehensive individual and collective human rights of the Filipino people for over 60 years,” said ICHRP chairperson Peter Murphy.

“His advocacy of armed struggle as a legitimate and vital part of the Filipino liberation struggle attracted massive retaliation from the US government and its Filipino subordinates. But all peoples have the right to rebel against tyranny, as expressed in the preamble to the Universal Declaration of Human Rights. Ka Joma insisted that the armed struggle in the Philippines be conducted lawfully,” said Murphy.

While in exile in the Netherlands, Sison was able to play a key role in the decades-long peace talks between the Government of the Republic of the Philippines and the National Democratic Front of the Philippines. Through his active participation with the NDFP panel, three major agreements between the two parties were signed — the The Hague Joint Declaration, the Comprehensive Agreement on Respect for Human Rights and International Humanitarian Law (CARHRIHL), and the Joint Agreement on Security and Immunity Guarantees (JASIG). As well, Ka Joma contributed to the draft Comprehensive Agreement on Social and Economic Reforms (CASER), which was initiated by both negotiating panels in 2017, but blocked by President Duterte.

“The draft CASER represents a decisive step forward in addressing the roots of social conflict in the Philippines,” said Murphy.

These agreements are monumental contributions to the struggle for the Filipino people’s rights. The Hague Joint Declaration recognized that the NDFP and GRP are equals in the peace talks, which are aimed at resolving the armed conflict with a just and lasting peace. It set out four substantive agenda for the negotiations — CARHRIHL, social and economic reforms, political and constitutional reforms, and the end of hostilities and disposition of forces.

CARHRIHL applies the United Nations international human rights conventions and International Humanitarian Law to ensure the protection and respect of the human rights of civilians and of forces of both parties who are rendered hors de combat while directly participating in the armed conflict. The draft CASER contains specific initiatives to solve the poverty, exploitation and oppression that is the root of the armed conflict in the country, such as genuine land reform, rural development, and national industrialization.