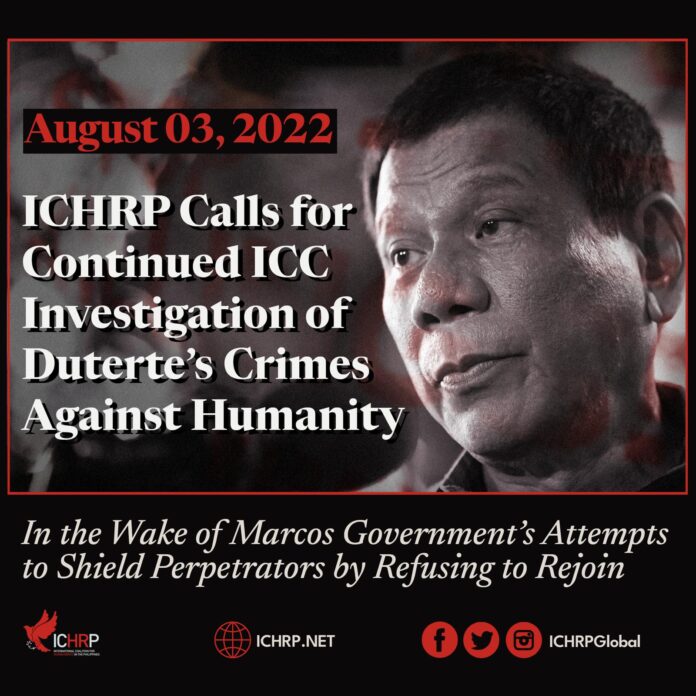 Refusal of the Marcos Administration to rejoin the ICC shields Duterte and his policies of impunity and state terror, further victimizing the 30,000 that were summarily executed in the Duterte regime’s wars on drugs; on dissent; and on the Moro people.

“The International Coalition for Human Rights in the Philippines [ICHRP] is extremely disappointed but not surprised by the new Marcos administration’s decision to keep the Philippines outside the jurisdiction of the International Criminal Court [ICC],” said ICHRP Chairperson Peter Murphy today. “This is part of the continued and ongoing state cover-up of crimes against humanity.”

ICHRP believes the confirmation that the Philippines is out of the ICC is an ominous sign for human rights as the only rationale for not being under its jurisdiction is to shelter perpetrators from prosecution and the intention to continue committing such crimes.

Despite this deplorable decision by the Marcos government, there remain grounds for the continued investigation of Duterte presidency’s alleged crimes against humanity.

In June 2021, ICC Prosecutor Fatou Bensouda reported that there were sufficient grounds for a full investigation into the crime against humanity of murder committed in connection with the country’s ‘war on drugs’ between 1 July 2016 and 16 March 2019. ICHRP urges that this full investigation be vigorously pursued and not be stalled by continued false claims that the Philippine judicial system is functioning and can address any concerns about these alleged gross violations of human rights.

“The findings of the First and Second Reports of the Independent International Commission of Investigation into Human Rights Violations in the Philippines (Investigate PH) clearly showed the flaws and failure of the domestic remedies,” said Murphy.

The Philippine courts had managed to convict only two police officers for the 2017 murder of 17 year-old Kian Delos Santos. This was one case of the 6,011 officially recorded up to the end of 2020. This case only succeeded because the Barangay Captain had failed to switch off the CCTV which recorded the police abduction of Kian.

Investigate PH also dispelled the Philippine government claims that the thousands of victims of the ‘war on drugs’ were killed by police in self-defence. It presented forensic evidence to the ICC of victims with defensive wounds, of victims who had been bound before being killed. But there are probably over 30,000 cases of these police killings in anti-drug operations, based on statistics of “Deaths Under Investigation”. And now the Philippine Drug Enforcement Agency no longer reports deaths in anti-drug operations, on their Real Numbers PH webpage.

“A review – of 5,655 cases – was first promised by Justice Secretary Guevarra to the UN Human Rights Council in June 2020,” said Murphy. In February 2021 Secretary Guevarra reported that just 328 cases had been reviewed, revealing no proper crime scene investigation in more than half the cases.

“ICHRP has full confidence in the impartiality of the ICC. We reiterate that the ICC should vigorously pursue the full investigation of the previous Duterte administration for these alleged crimes against humanity so that, finally, justice may be served and impunity ended,” Murphy said.

ICHRP initiated the Investigate PH project, under which an independent international commission conducted its three-part investigation on the extrajudicial killings, illegal arrests, abductions and disappearances, and breaches of collective human rights in the Philippines since 2016 when President Duterte came into power. #