ICHRPInternational Coalition for Human Rights for the Philippines
More
Home news Martial Law in the Philippines @50: Continuing Past and the Struggle Continues
Facebook
Twitter
Pinterest
WhatsApp 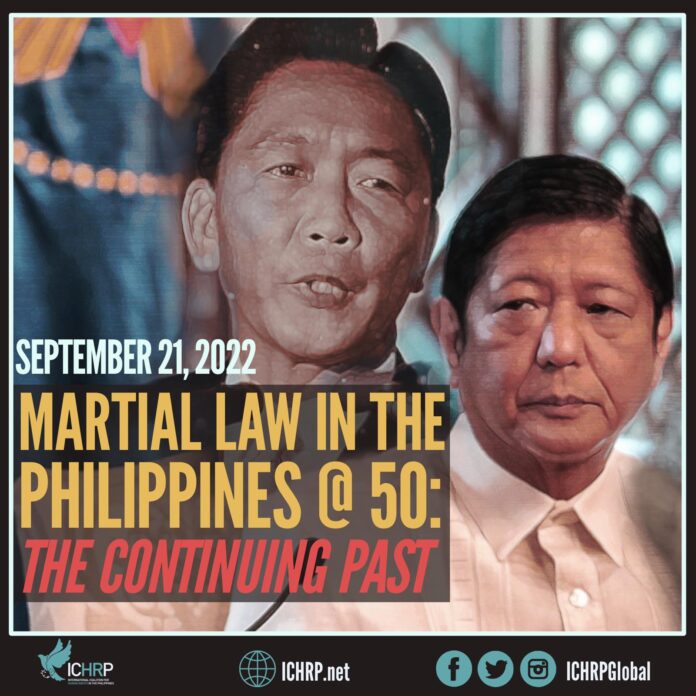 The International Coalition for Human Rights in the Philippines (ICHRP) are writing to express our profound concerns at the ongoing human rights crisis in the Philippines on this 50th Anniversary of the Declaration of Martial law of September 21st, 1972.

The first Marcos regime resulted in 14 years of oppressive military rule, widespread torture, imprisonment, and thousands of extra judicial killings in an ongoing attempt to crush dissent. The dictatorship also gave rise to a large bloated military command structure which has played an ever-increasing role in the country’s political life. In addition, during the Marcos family’s dictatorship between 5 to 10 billion dollars were embezzled, only a fraction of which was ever recovered, much of this wealth remains in the hands of the Marcos children and their cronies in a myriad of Swiss and offshore accounts, and properties.

The Marcos Dictatorship rather than creating sustainable growth set in motion a labour export program that exists to this day, sending a huge workforce overseas to generate foreign exchange reserves for the oligarchs and political elites. More than 10 million Filipinos now work and live abroad, of which 800,000 are in Canada. It’s the largest, fastest growing migrant group in Canada.

Fifty years on, the Philippines is at a crossroads. Over the past six years we have seen once again an accelerated drift away from democracy towards a military state. During this period there have been documented upwards of 30,000 extra judicial killings by the police and military with total impunity.

The Duterte government institutionalized the militarization of society through the NTF-ELCAC and its total war approach. The regime targeted and harassed labour activists, farmers, journalists, lawyers, environmental activists, church people and human rights advocates, scores were killed and hundreds remain in prison. In terms of accountability for human rights the legal system is largely not functioning, out of the tens of thousands of state orchestrated killings less than a handful have produced charges against the state security forces.

There are now new storm clouds on the horizon. The May 2022 elections brought the Marcos-Duterte team to the highest executive offices in the country, along with a coterie of oligarchs and family dynasties who control the Senate and Congress. Political power was purchased on a wave of ill-gotten wealth, fraud, vote buying and a highly sophisticated disinformation campaign. It was a presidential campaign funded in part by billions of dollars stolen by the Marcos family in the 1970s and 1980’s during the Martial Law period.

The Marcos-Duterte administration has refused to engage in a peace process with the NDFP and it has continued redtagging organizations and individuals who stand against status quo. It has continued to attack and silence the press, by shutting down Rappler, one of the few critical independent media outlets in the Philippines. It intends to resume the brutal War on Drugs, generated by the Duterte Regime. It is early days, but the Bongbong Marcos rule has taken on the characteristics of the brutal Duterte Regime.

On the 50th Anniversary of one of the darkest periods in Philippine history, the human rights community are uniting in calling for an end to state violence, an end to democracy for the rich and the democratization of the economy through land reform, better wages and working conditions for the Filipino. The Filipino people cannot expect anything from a government implementing neoliberal policies which prioritizes big businesses and kowtows to the dictates of foreign powers.

We call on the international community to stand with the Filipino people’s struggle against the fascist Marcos-Duterte regime.

We call on our governments to hold the perpetrators of Human Rights violations in the Philippines accountable through existing legal mechanisms including the Magnitsky Act.

We call on our governments to hold the new Marcos Government accountable for its human rights record by ending all arms sales to the Philippines and all technical cooperation for the police and military.

We call on the International Criminal Court to vigorously pursue the case of Crimes Against Humanity against Rodrigo Duterte and those complicit in human rights violations in his government.

We call on the UN High Commissioner for Human Rights to review the case against the Philippines and go beyond the domestic measures compromise decision of 2021.

We are united in our declaration.

International Coalition for Human Rights in the Philippines, (ICHRP)