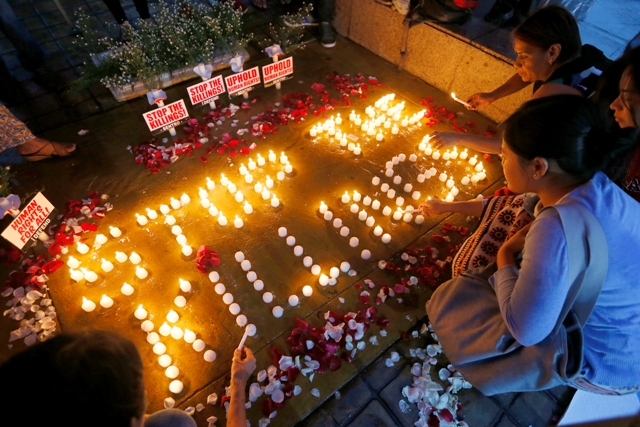 “Kill, kill them all. Finish them. Don’t mind human rights,” is the marching order from Philippine president Rodrigo Duterte last March 5 which led to a blood bath two days later, killing 9 civilians. The massacre happened Sunday in the provinces of Cavite, Laguna, Batangas, and Rizal, all located southeast of the country’s capital.

The International Coalition for Human Rights in the Philippines (ICHRP), a global network of human rights organisations, condemns the recent attacks saying that “no amount of lies by the  government can whitewash the accountability of Duterte and state forces in the ‘Bloody Sunday’ raids.”

“We are mourning and in shock from this recent news in the Philippines. These state-sanctioned killings and arrests should be known to the world. The UN bodies should know, the world should know that “Duterte’s words lead directly to murder of Filipinos, he’s out for blood,” says ICHRP chairperson Mr. Peter Murphy.

The joint police-military raids were synchronised and employed Tokhang-style operations, the ‘barge in and shoot’ method used by police to kill thousands of civilians in the mis-named ‘war on drugs’. This killing of five identified local leaders of grassroots organisations and the arrest of 9 human rights activists is now referred to as ‘Bloody Sunday’.

In the latest speech to the UNHRC of Permanent Representative of the Philippines to the United Nations Ambassador Evan Garcia, he threatened and maligned efforts of rights groups and the international community to expose human rights atrocities in the country saying that “use of certain groups in the human rights defenders’ space as a cover for their association with terrorism and other crimes” and adding that it is an “abuse of the good faith of the Human Rights Council and its mechanisms”

“These are prejudicial comments that amount as threats and vilification to victims,  human rights defenders, and even the well-meaning members of the international community,” says ICHRP.

“No amount of grandstanding in the UNHRC by the Philippine government can hide the fact that the president of the country is ordering the killings of activists, human rights defenders and civilians,” says Murphy referring to the speech of Justice Minister Guevarra’s speech and vile claims of Garcia to the the UN Human Rights Council.

The search warrants – which turned out to be death warrants for the simultaneous operations – were issued by Jose Lorenzo de la Rosa, a presiding Judge of the Metro Manila Branch 4. Dela Rosa is the same Judge who issued search warrants against indigenous Tumandok that led to a massacre of 9 tribal leaders and the arrest of 16 residents on December 30, 2020.

At least 300 farmers, indigenous people, human rights defenders, including 55 lawyers and judges, have been killed since Duterte came to power.

ICHRP stresses that the current reality in the Philippines “is impunity, mass killings and escalating human rights abuses. This is a determined affront to the efforts of the UN Human Rights Council and the entire international community.”#