The death of Willem Geertman, a Dutch NGO worker and missionary in the
Philippines, has shocked the Filipino-Dutch solidarity community. 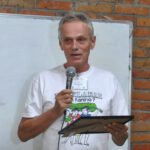 this solidarity worker who dedicated more than four decades of his life working with poor farmers and rural folks in Central Luzon.

Geertman was shot in front of his office around 1pm by two motorcycle riding men believed to be military agents. His death is strongly suspected to be another extrajudicial and politically motivated assassination of those working with peoples organizations critical of the governments anti-people policies.

BAYAN Europe will support the campaign for justice for Willem Geertman,
who is the second European NGO/Community worker in the Philippines killed under the Aquino regime, after the death of Fr. Pops Tentorio in Mindanao. Talks with the Nederlands-Filippijnse Solidariteitsbeweging (NFS), the International Coordinating Committee for Human Rights in the Philippines (ICCHRP), and other concerned Filipino migrant, human rights, and solidarity organizations in the Netherlands to launch the campaign is already under way.

We call on the international community to support the struggle to end impunity in the Philippines.

For more information related to this incident, please visit the website of Bayan Europe where statements from several Filipino organizations who have worked with Geertman have been posted in BAYAN Europes website.

JUSTICE FOR WILLEM GEERTMAN!
JUSTICE FOR ALL VICTIMS OF EXTRAJUDICIAL KILLINGS IN THE PHILIPPINES!
END IMPUNITY NOW!