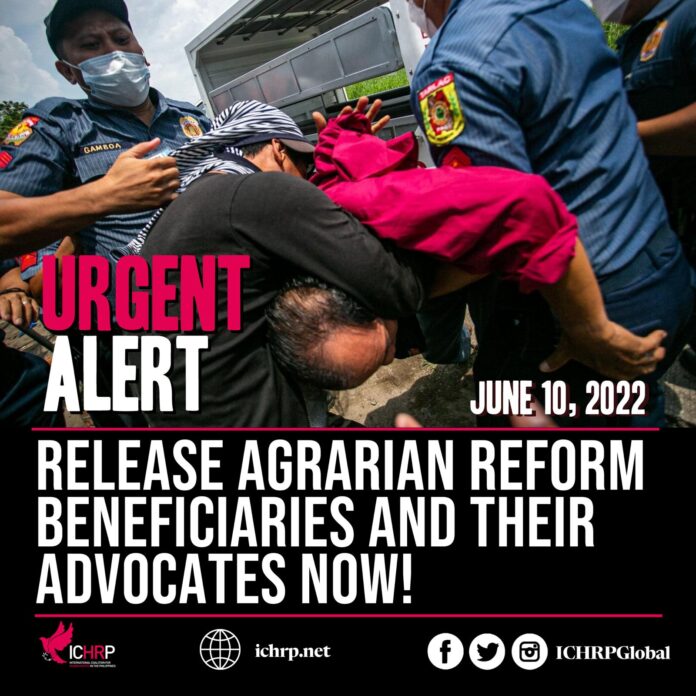 The International Coalition for Human Rights in the Philippines (ICHRP) calls for the release of some 97 agrarian reform beneficiaries and agrarian reform advocates nabbed in Tarlac on the eve of the 34th year of the Comprehensive Agrarian Reform Law (CARP).The CARP was originally passed under the Aquino government in 1988 and those arrested were advocates and beneficiaries of a genuine agrarian reform program.

Policemen arrested around 100 agrarian reform beneficiaries and agrarian reform advocates at Hacienda Tinang, Concepcion, Tarlac on June 9, 2022 at around 1pm. This included 6 farmers, 30 students including one journalist from mainstream media, 11 researchers, 45 peasant advocates, 2 senior citizens, 3 drivers and 4 minors (whom police will only release to the Department of Social Welfare and Development).

Prior to the arrests, local police had ordered the legitimate agrarian reform beneficiaries to stop the bungkalan (collective farming) in Hacienda Tinang, and attempted to arrest Felino Cunanan, Jr., chairperson of the land reform advocacy group MAKISAMA-Tinang. The police later returned to disrupt the mobilization and peaceful program that had just started.

Among the arrested are those beneficiaries promised land through the CARP. Despite confirming the arrested farmers were legitimate beneficiaries under CARP and that the issue was land dispute-related, local representatives of the Department of Agrarian Reform (DAR) said they would not interfere in the repressive actions of the Philippine National Police (PNP).

The police aggressively targeted anyone within reach, and eventually seized the belongings and placed in custody three members of MAKISAMA-Tinang: Felino Cunanan Jr., Ophelia Cunanan, and Alvin Dimarucot.

Police surrounded and dismantled the hut where more than 90 advocates sought refuge during the violent disruption. They were tagged as NPA and have been held, with the arrested farmers, at the PNP Concepcion precinct since 1pm on June 9, 2022. They are reportedly set for inquest and charged with obstruction of justice, some with alleged malicious mischief.

ICHRP joins the Unyon ng Manggagawa sa Agrikultura’s (Union of Workers in Agriculture) and calls on the international community to demand the immediate release of the those arrested, and to pressure the DAR to defend the agrarian reform beneficiaries who, since 1995, are being robbed of their right to till their land.

“Agrarian reform beneficiaries and advocates, and their activities to advance agrarian reform, should not be criminalized. The use of bungkalan (collective farming) to help sustain daily food subsistence in order to survive is not a crime,” said Peter Murphy, ICHRP chairperson.