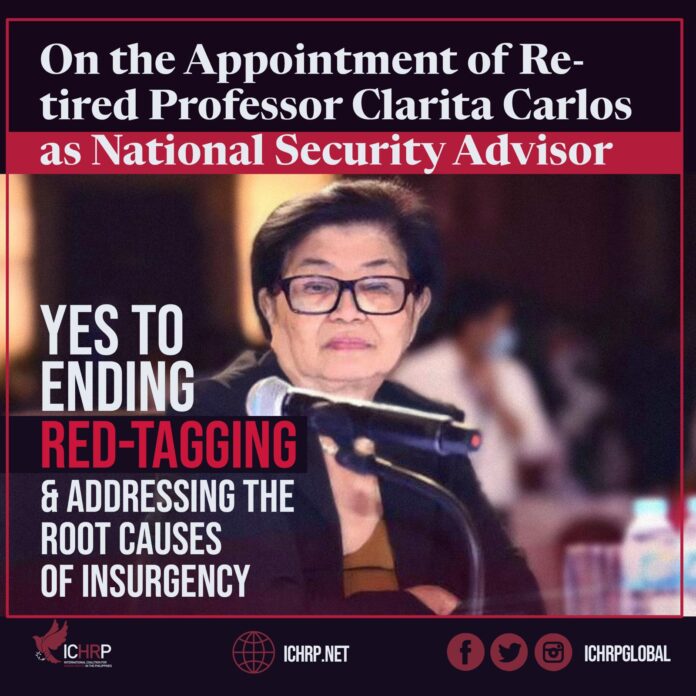 The International Coalition for Human Rights in the Philippines (ICHRP) welcomes the statement by incoming National Security Adviser Dr. Clarita Carlos in which she said the red-tagging should stop and that the inequalities and injustices that are at the roots of the country’s long standing insurgency should be addressed.

We in the international community, having observed, lived and partnered with various marginalized and oppressed sectors of Philippine society, know full well how hardworking and persevering Filipinos are in the midst of any adversity – be it natural calamities or human atrocities, whether locally or overseas. We know full well how badly and for how long they have been yearning to live a life free of exploitation, abuse, and violence, and how they were and are not complicit in any Philippine President’s human rights abuses.

We agree with Dr. Carlos that human security is the road to Philippine national security and that this must be the top priority. We understand how centuries of landlord greed and violence have buried and continue to bury Filipinos deep into poverty and starvation; and how centuries of corruption and profiteering by the government in partnership with landlords and local and foreign businesses have impoverished and subjected the Filipino poor to state-instigated violence. And we understand that where there is exploitation and violence, people either become helpless victims or they fight back.

Ending red-tagging is a great first move. Indeed, red tagging achieves nothing in terms of attaining peace, but only attempts to intimidate and silence critics and puts more and more people in danger. We are keen to see immediate results including the abolition of the number one red-tagger, the National Task Force to End Local Communist Armed Conflict, and repeal of the Anti -Terror Law, which serves as its legal basis. We also hope she will push for the passage of a bill[1] that classifies red-tagging as a human rights violation with accompanying punishment. We also urge Dr. Carlos to call for ending all forms of human rights violations and for urgently serving justice beginning with the survivors of Martial Law, the families of the victims of tokhang, all political prisoners, and victims of illegal and arbitrary arrests and detention such as the 97 Tinang farmers, among many others.

We agree with her that a militaristic approach never works, and that in achieving human security and ending insurgency, there must be a national strategy that ties together the different aspects of Philippine politics and economy and that gives people opportunities. At the same time, we understand that the insurgents, peace advocates, and the Filipino people in general have long been calling for genuine land reform, for decent jobs with living wages at home, an end to forced migration, for the respect of their basic freedoms and rights. We are aware that the insurgents and various peace advocates have presented their draft of the Comprehensive Agreement on Social and Economic Reforms that will ensure genuine agrarian reform and national industrialization, and wait for Dr. Carlos to work with concerned groups on an action plan that will finally make this possible.

This being a solution to a national problem requires a national-level discussion, agreement and implementation. Local peace councils alone have been a “divide and conquer” strategy that has given superficial livelihood, road and housing projects, conducted psywar operations, and only served the interests of landlords and businesses in keeping control of the country’s lands and natural resources.

ICHRP is committed to supporting the Filipino people in their assertion and defense of human rights and will await Dr. Carlos’s next pronouncements and actions in addressing these. While Dr. Carlos is optimistic that Marcos Jr will not abandon the liberal democracy path, ICHRP believes this falls well short of the  Filipino people’s calls for genuine national democracy. #