Torture still in practice under the Aquino govt –Karapatan 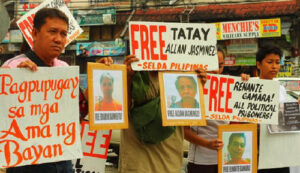 Karapatan Public Info Desk, 27 Jun 2012, Press Statement –   As the world commemorated on June 26 the International Day in Support of Victims of Torture, the Aquino government continues to employ torture on political prisoners as in the case of Tirso Alcantara, a consultant of the National Democratic Front of the Philippines (NDFP) to the peace process.

“There is too much duplicity in the air. The AFP held a ‘run against torture’ on June 26 yet it has been named as the perpetrator in most of the 96 torture cases Karapatan has documented under the Aquino government. Noynoy Aquino portrays himself and his counter-insurgency program as pro-human rights yet human rights violations continue with impunity; even failing until now to jail ‘The Butcher’ Gen. Palparan. The Philippines is a signatory to the Convention Against Torture yet political prisoners like Alcantara and Ramon Patriarca are kept under solitary confinement and denied of their rights,” said Marie Hilao-Enriquez, chairperson of Karapatan.

In a sworn statement dated June 16, 2012, Alcantara enumerated the ill-treatment he experiences in detention in Fort Bonifacio such as,solitary confinement, deprivation of sunning and limited visitation rights, being served with food with dirt, trash, broken pieces of glass and fecal matter and ‘mentholated’ water that caused him vomiting and loose bowel movement. Even the medicine given him by a person who pretended to be a doctor caused him nausea, palpitations and terrible pain on his neck. Patriarca, on the other hand, was also forcibly transferred from the Danao Provincial Jail, a regular detention facility, to the AFP Central Command in Cebu.

Karapatan reiterates that Alcantara and the 13 other NDFP peace consultants are protected by the Joint Agreement on Safety and Immunity Guarantees (JASIG). “They should be out of jail, in the first place if not for the government’s disinterest to keep the peace negotiation going. The government must fulfil its promise to work for their release as stipulated in the documents signed during the peace talks on February 2011,” said Hilao-Enriquez.

“At the very least, the self-professed human rights advocate President could get Alcantara and Patriarca out of military detention centers and into a civilian facility; or the government can heed the offer of the Philippine Ecumenical Peace Platform (PEPP) to “release in recognizance under the collective custodial guarantee of the member churches of the NDFP consultants who are willing to be under the sanctuary of churches.”

Stop all forms of torture!
End Impunity in the Philippines now!