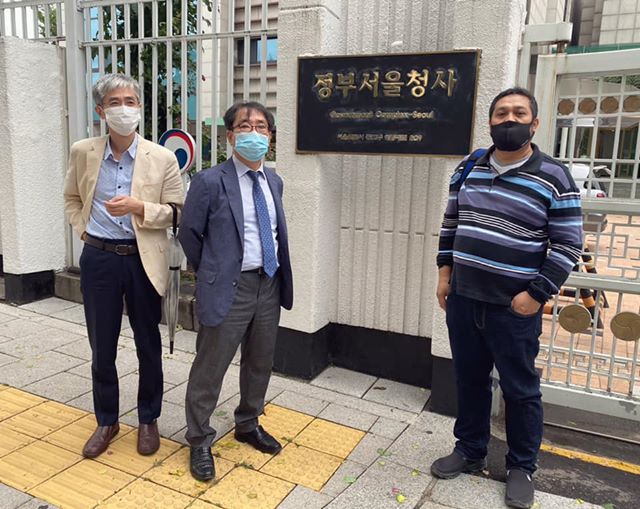 We Condemn the Duterte government for Continuous Suppression of Human Rights!

The government enforced the Act that posed a serious threat to human rights and democracy of the Philippines, regardless of concerns from the international community as well as the Philippines.

Anti-Terrorism Act of 2020, the retrogressive revision of the 2007 Human security Act has absolute power to regard all activities against the Duterte government as ‘terrorism’.

The Act defines terrorism as acts endangering a person’s life, causing damage or destruction to public or private facility and property, and manufacturing or transporting weapons and explosive.

Also it punishes actors who incite terrorism by means of speeches, proclamations, banners and etc.

Commission on Human Rights of the Philippines already opines that this regulation on terrorism is ambiguous and could be applied too extensively. That is, if government critics are defined as terrorism, it means that posting a statement on SNS as well as demonstrations could be subject to punishment.

If a new Anti-Terrorism Council, consisting of members appointed by president, designates people as terrorist suspects, it is able to detain them up to 24 days without a judicial warrant and do surveillance or wiretapping unlimitedly. Also, the ones who violate the Act could be imposed life imprisonment without bail to maximum. Like this, the Act itself is full of elements that seriously threaten human rights. However, the most critical point is that it is obvious that the Act would be abused by the Duterte government.

Since the inauguration, President Duterte has been undiscriminatingly killing lots of people in the cause of ‘war on drugs’. The fact that those extrajudicial killings have been conducted by the nation is serious challenge in itself on human rights norms that humankind has agreed upon and kept. Besides, the grave state of human rights in the Philippines that human rights activists, indigenous people, union leaders, lawyers and others who oppose the Duterte government have been branded as “Commie” and even murdered has been emerged as a severe human rights problem in the international community for a long time.

Further, before passing the Act, including UN human right Chief Michelle Bachelet, UN human rights special rapporteurs already clearly expressed opinion that even if there is a reason for national security, suppression of human rights or interruption to acts of human rights activists should not be tolerated. However, Korean civil societies have no choice but agree on concerns of the Philippines civil societies that the purpose of the Duterte government who push ahead the Act even though the Philippines financial circles oppose is reinstating dictatorship during the Marcos administration.

We call on the South Korean government to express clear position on the Duterte government’s activities that degenerate democracy and human rights. While promoting New Southern Policy, the South Korean government hasn’t expressed position on suppression of human rights by the Duterte government. After all, with the situation that the Act against the humanity has been enforced, serious consideration is necessary whether cooperation under the principle of New Southern policy, “People, Peace, and Prosperity” could be held. We cannot but asking who coexistence is for in the situation that human rights is trampled and peace is destroyed.