The Diminishing Respect for Human Rights in the Philippines 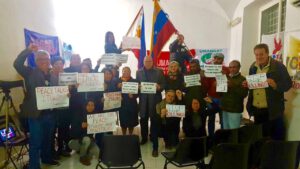 “Is the promised of change possible by the Duterte government, while the nation becomes the bloodshed of unjust killings and terror? In a state where life and dignity of every person have no more values but hatred for the poor and oppressed?”
Fr. Herbert Fadriquela, Chairperson Migrante Europe

On the 18th month of Duterte’s Presidency, he turns the state into much alarming human rights situation. His anti-poor campaigns, the war on drugs and withdrawal on peace talks, have put the most marginalized sector of Filipinos in vulnerability and abuse; indeed the European communities became vocal on strong criticism against Duterte’s arrogance and madness, his dictatorship, and fascist rule.

Most Filipinos remain poor despite Duterte’s anti-poverty pledge “to transform the Philippines into a prosperous, predominantly middle-class society.” Recently, when the urban poor headed by Kadamay who trooped to NHA to demand the distribution of idle houses, they were confronted by violent dispersal by the state security forces and results to the serious injuries to protesters and the illegal arrest and detention of a Migrante campaign staff.

It is estimated that 44% of the urban population live in slums (UN-Habitat). In Manila, 3.1 million are homeless. An estimated 1.2 million children sleep rough, with more than 70,000 in Manila. A genuine housing program for the poor and homeless is the economic, social and cultural right to adequate housing and shelter. Economic prosperity is an illusion when a great number of populations are denied proper housing right.

Duterte’s notorious war on drug triggered an international alarm and global protests of human rights advocates group and Migrante chapters abroad. As of August 2017, the death toll has now reached 13,000. An estimated 3,451 “drug personalities” have been killed in gun battles. Another 2,000 more died in drug-related homicides, including attacks by masked gunmen on the motorcycle and other assaults, while the 8,200 homicide cases are under investigation.

Since June 2016, when Duterte took office, there have been at least 30 minors killed. The killing of Kian de Los Santos, 17 years old and a son of an OFW, who witnesses said was falsely accused of being a drug dealer, heightened mass protests, and outrages over Duterte’s ruthless war on drugs.

Much worse, following Duterte’s issuance of proclamation 360, formally terminating peace talks with the Communist Party of the Philippines (CPP)-National Democratic Front of the Philippines (NDFP) last November 23, members of human rights fact-finding mission in Negros Oriental were attacked by suspected state forces that claimed the lives of Elisa Badayos, regional coordinator of KARAPATAN, and peasant organizer Eleuterio Moises. With the government tagging CPP-NPA as a terrorist group and accusing progressive militant organizations of conspiracy, there will be more killings, illegal arrests, and detention of activists and mass leaders.

According to KARAPATAN, from July 2016 to November 2017, there were 924 illegal arrests without detention and 256 arrests in detention. Currently, there are 449 political prisoners facing trumped up charges, including Bishop Carlos Morales, who was arrested last May.

Bishop Morales, the Bishop of Ozamis in the Iglesia Filipina Independiente, or Philippine Independent Church (IFI), was charged with “illegal possession of firearms and ammunitions.” According to the World Council of Churches (WCC), Bishop Morales is a respected church leader from the IFI, a member church of the World Council of Churches, and is well known for his activism for dialogue, justice, and peace in Mindanao.

Amid the crackdown and mass arrest, the human rights advocacy groups and broadest Filipino mass organizations and abroad including Migrante Europe will continue its fight against all forms of repressions and oppression by the present regime.

From December 10, the International Human Rights Day and the International Migrants Day on December 18, Migrante Europe and its chapters, members, and allied organization will hold protests, significant events to denounce the human rights violations committed by the state security forces and the Duterte government against the Filipino people.

The following cities in Europe will hold protest and actions on teh said occasion above: