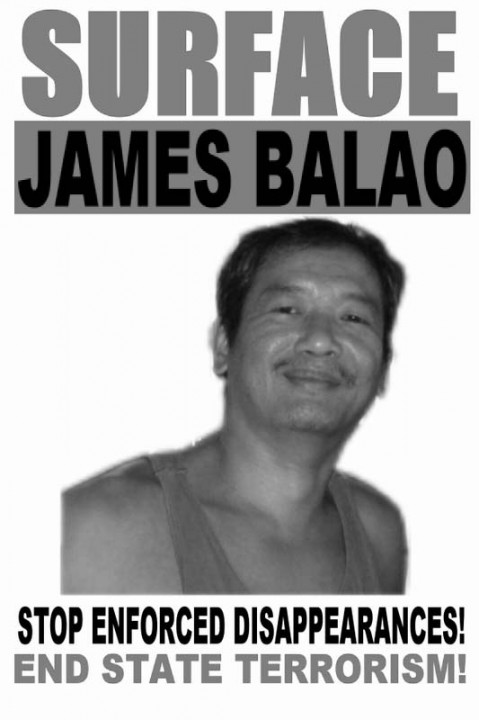 Missing the Disappeared
If by chance you were there when it happened
I wish you did not shut your eyes as you would when lightning strikes
I would want you to remember how he looked
How he reached out in silent horror for you to
Memorize details of the moment
Because he knew it would come to this
Searching is a giant question mark
That hooks the nerves and curses the dark and unknown
It cannot be that he remains just a name
With a fact sheet attached
He  has to be somewhere breathing reaching
For the chance to be with us again.

James Balao, a founding member of the Cordillera Peoples Alliance, was abducted by State security forces on the morning of September 17, 2008 in Tomay, La Trinidad, Benguet.  He is among the 205 victims of enforced disappearance from 2001- June 2010 with the implementation of  Operation Plan Bantay Laya (Operation Plan Freedomwatch) of the Philippine government  under former President Gloria Macapagal-Arroyo.

His family, friends, the Cordillera Peoples Alliance, the Cordillera Human Rights Alliance and his colleagues continue to search for him. More than 9000 postcards  and letters to President Benigno Aquino III have been sent to call his attention to the case and the issue of enforced disappearances in the country.

Tomorrow, April 19, the Balao family, the Cordillera Peoples Alliance and the Cordillera Human Rights Alliance, James’ friends and colleagues will gather at 5:30 in the afternoon at the Baguio Cathedral grounds.   51 candles for James will be lit to call on the government to surface James and stop enforced disappearances in the country.