Members of Luisita farmworkers alliance AMBALA reported that past 3:00 in the afternoon today, a Sunday, that around 50 armed personnel of the Great Star Security Agency employed by TADECO started bulldozing a ricefield in Barangay Cutcut.

Dozens of AMBALA members who rushed to the scene were able to stop TADECO guards but only after  the bulldozers already flattened around a hectare of the area. AMBALA asserted that the farmlands in Cutcut are subject of a pending court case and a notice of land reform coverage by the Department of Agrarian Reform (DAR).

It may be recalled that TADECO also ordered the bulldozing of more than a hundred hectares of  crops in Barangay Balete during the Christmas season. The destruction of crops and eviction of farmers was actively assisted by the Tarlac Provincial Police and also led to the mauling, unlawful arrest and detention of five farmers who were trying to defend their land. 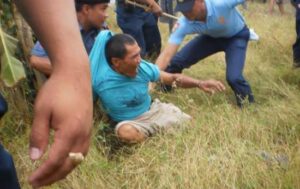 Today, the 268-hectare agricultural land in Barangay Balete, which is also subject of the same DAR notice issued on 17 December 2013, is already fenced with barbed wires, iron sheets and concrete. The area is also heavily guarded by armed TADECO guards and by a company of soldiers belonging to the 3rd Mechanized Batallion. This army unit’s headquarters, located inside the fenced TADECO area in Balete, is also where the Cojuangco bulldozers are parked.

This incident boosts our assertion that the DAR and its top officials are in collusion with the Cojuangco-Aquinos and TADECO,” said Christopher Garcia, AMBALA spokesperson. Aside from its mum stance on the bulldozing issue, DAR personnel are also openly conniving with Cojuangco dummies such as ex-Land Transportation Office Chief Virgie Torres to reclaim vast agricultural lands from farmworker-beneficiaries through the illicit “aryendo” or lease system.

AMBALA also scored DAR Undersecretary Anthony Parungao for denying any knowledge of harassment perpetrated by TADECO against the farmers. Parungao was quoted in a 30 January 2014 news article in the Business Mirror as saying that the DAR has received no report of alleged harassment.

The DAR already acknowledged that TADECO filed cases of unlawful detainer against more than 100 farmers in Barangays Cutcut and Balete. In fact, when it released a Notice of Coverage (NOC) for TADECO on 17 December 2013, the DAR used as basis the titles submitted by TADECO in court. The violent and illegal eviction conducted by the Tarlac PNP together with Cojuangco guards and goons on 21 December 2013 became front page news in a major daily and went viral in the internet.

Even if DAR officials failed to know about the violence against Luisita farmers through traditional and social media, AMBALA made sure that the DAR was duly notified by filing an urgent petition for the issuance of a cease and desist order (CDO) against TADECO before the DAR’s regional office in Pampanga a day after Christmas, 26 December 2013. The Unyon ng mga Manggagawa sa Agrikultura (UMA, Union of Workers in Agriculture) immediately furnished the DAR Main Office in Quezon City copies of this urgent petition.

The DAR issued an impotent “show cause order” to TADECO via courier service the next day.

Farmers were able to confirm  the inutility of the DAR’s “due process” when low-level officials of the DAR admitted in a dialogue with AMBALA that they cannot as yet do anything about the CDO petition because the Cojuangcos refused to receive the show cause order. Technically, the DAR can only act “10 days after receipt” of the said order. Undersecretary Parungao and other key DAR officials failed to attend this dialogue held on 21 January 2014 at the DAR main office, despite an urgent plea from Luisita farmers.

However, Parungao himself signed official correspondence asking Florida Sibayan of AMBALA to update DAR on developments regarding the CDO petition. The letter was dated 08 January 2014 but was delivered to  Sibayan’s residence in Tarlac only a week after the said DAR dialogue.

AMBALA also called on the Department of Justice to create a special panel for Luisita human rights cases. AMBALA recently filed a motion to cite the DAR and TADECO in contempt for undermining the 2012 Supreme Court ruling to distribute Luisita to farmworkers.