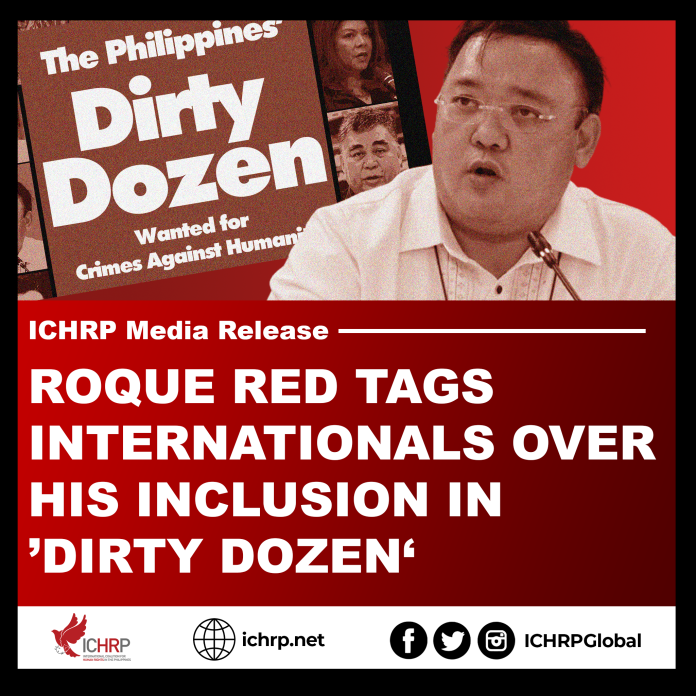 “Roque has made the preposterous but dangerous claim that the International Coalition for Human Rights in the Philippines is a ‘legal front’ for the Communist Party of the Philippines and the New People’s Army. Sadly this is a routine red tagging applied to any Filipino who advocates for land reform, workers’ rights, environmental protection or the rights of Indigenous Peoples, and it has led to 427 political killings during Duterte’s presidency up to the end of 2021. Now it is applied to foreigners,” said Mr Murphy.

“Roque used his attack on ICHRP to red tag the Bayan-Muna Party List and the BAYAN alliance of people’s organisations, mistakenly claiming that BAYAN is a member of ICHRP. ICHRP member organizations are all based outside the Philippines, and are organizations of non-Filipino citizens, including churches, trade unions, and lawyers’ associations,” said Mr Murphy.

“While numerous statements by President Duterte are subsequently clarified by his spokesperson and other officials as not to be taken literally, the widespread killings, detentions, red-tagging and score-settling by State actors, including in the campaign against illegal drugs, suggest that his public comments may have incited violence and may have had the effect of encouraging, backing or even ordering human rights violations with impunity. The use of such language could amount to a violation of the prohibition against arbitrary deprivation of life in Article 6 of the International Covenant on Civil and Political Rights.” (p. 15)

As Presidential Spokesperson, Harry Roque did much ‘clarifying’ of the President’s incitements, and justified the withdrawal of the Philippines from the jurisdiction of the International Criminal Court. In November 2021, the Philippine government nomination of Roque, a supposedly former human right lawyer, to the UN International Law Commission was rejected.