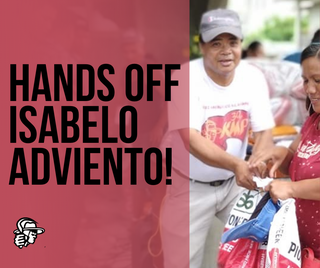 At 8pm on April 8, 2022, at least 30 officers of the Philippine National Police arrested Isabelo ‘Tang Buting’ Adviento while he was eating in a Jollibee restaurant in Bayambong, the capital of Nueva Vizcaya Province. He is the latest activist to be arrested a few months before the elections.

Karapatan, the national alliance for people’s rights, said that Isabelo Adviento was taken to the Bayombong police station for temporary custody before he was turned over to the police in Tuguegarao City.

The Bayombong municipal police confirmed that he is charged with alleged illegal possession of firearms and explosives seized during an illegal raid of his house in Cagayan in December 2020. A warrant was issued in June 2021.

According to the Bayombong Police, Adviento was arrested for alleged violation of Republic Act No. 10591 or the Comprehensive Firearms and Ammunition Regulation Act, and Republic Act No. 9516 or the act amending the presidential decree on the possession of and other prohibited acts on firearms.

Adviento is the chairperson of Danggayan iti Mannalon iti Cagayan Valley, the local chapter of the Kilusang Magbubukid ng Pilipinas (KMP), and Anakpawis-Cagayan Valley regional coordinator. The charges of illegal possession of firearms and explosives are the standard allegation against activists and critics of the Rodrigo Duterte government. Adviento’s organizations said the police planted guns and explosives in his house in December 2020 and pointed out that no search or arrest warrant was presented during the raid.

The peasant leader was then leading a relief mission for survivors of Typhoon Ulysses elsewhere in the region at the time of the raid. In a statement after the raid, Adviento asked the Commission on Human Rights (CHR) and the Department of Justice to “investigate and junk the trumped-up charges filed against innocent farmers” like himself and for CHR, church institutions, and local officials to assist those who are being persecuted. Adviento has been the subject of non-stop red-tagging, harassment, and surveillance by state forces for years but that has not stopped him from promoting human rights and handling farmers’ concerns.

We condemn the wrongful arrest of Isabelo Adviento as a violation of his civil and political rights, and a violation of the collective right of the Filipino people to a fair democratic election process. We call for his immediate release and an immediate and impartial investigation to identify the perpetrators who should then be prosecuted.