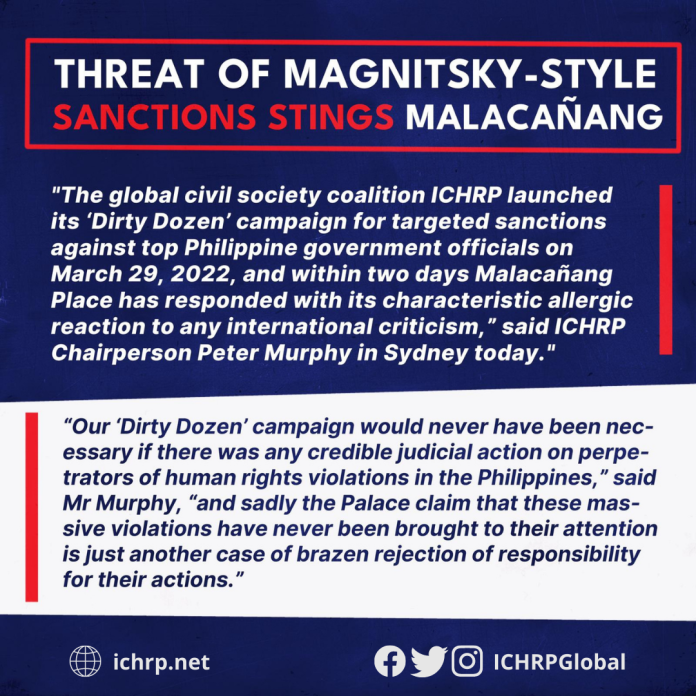 “Acting presidential spokesperson Martin Andanar was right to say we are ‘naming and shaming’ but he has no excuse to claim he is ‘baffled’ or that we are ‘misusing’ the available Magnitsky laws,” said Mr Murphy.

“Our ‘Dirty Dozen’ campaign would never have been necessary if there was any credible judicial action on perpetrators of human rights violations in the Philippines,” said Mr Murphy, “and sadly the Palace claim that these massive violations have never been brought to their attention is just another case of brazen rejection of responsibility for their actions.”

INVESTIGATE PH’s three Reports in 2021 covered more than 50 emblematic cases of human rights violations that occurred largely in 2020 and 2021; … violations of civil and political rights and IHL (International Humanitarian Law) carried out by the Duterte administration since 2016; and violations of economic, social, cultural and other collective rights. The Reports draw on the testimonies of survivors and witnesses, relatives of victims, human rights advocates with direct knowledge of state violence, and expert witnesses or resource persons working with peasants, trade unions, women, churches, community organizing, economics, political advocacy and peace negotiations.

“Persistent impunity for human rights violations is stark and the practical obstacles to accessing justice within the country are almost insurmountable. Human rights advocacy is routinely equated with insurgency and the focus diverted to discrediting the messengers rather than examining the substance of the message…

“Given the widespread and systematic nature of the alleged killings, and the failure of domestic mechanisms to ensure accountability thus far, there have been strong calls for an international accountability mechanism. In June 2019, a group of 11 Special Procedures mandate-holders called on the Human Rights Council to establish an independent investigation. … The High Commissioner again emphasizes the need for independent, impartial and effective investigations into the killings and stands ready to assist credible efforts towards accountability at the national and international level.”

ICHRP points to the decision of the International Criminal Court in September 2021 to investigate Philippine government officials for the crime against humanity of murder. “This demonstrates that nothing has improved, despite the claims of the Acting Presidential Spokesperson,” said Mr Murphy.

“Our ‘Dirty Dozen’ campaign will mobilize civil society to work with the parliaments and congresses of the USA, Canada, the European Union, UK, Japan and Australia to take action on these grave human rights violations, in parallel with the ICC.”