PNoy unfeeling, numb and insensitive to Morong 43 and other rights victims, pats on the back rights violator by promotion and awarding new post 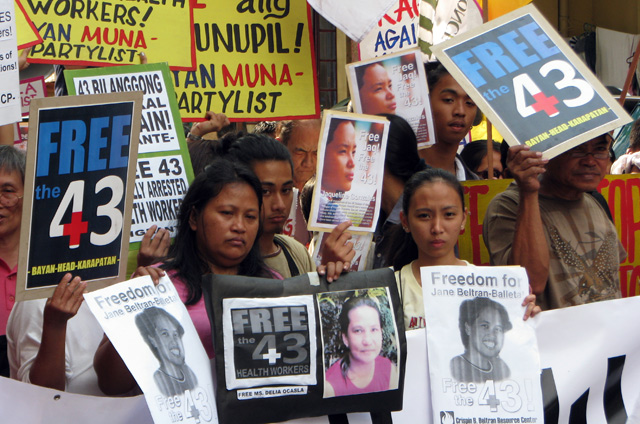 NUPL News Release: April 12, 2012 – “Unbelievably insensitive, if not unfeeling and numb.” This was how the National Union of Peoples’ Lawyers (NUPL) through its Secretary General Atty. Edre Olalia described the designation by President Benigno Aquino III of 10th Infantry Division chief Maj. Gen. Jorge Segovia as commander of the Davao City-based Eastern Mindanao Command (Eastmincom) of the Armed Forces of the Philippines (AFP). The new post promotes him to the next rank of lieutenant general.

Segovia headed the Army’s 2nd Infantry Division in Tanay, Rizal  that figured in the controversial arrest of the so-called Morong 43 in February 2010 during the time of his principal, rights violator herself, former President Gloria Arroyo. He had publicly and boastfully defended his actions and that of his men despite incontrovertible evidence of unbridled rights violations.

“PNoy’s cavalier move indubitably insults and spits on the still fresh wounds of the victims who were illegally arrested, detained and systematically tortured under Segovia’s command,” said Atty. Olalia. Segovia is a member of Philippine Military Academy (PMA) “Mapitagan” Class of 1980. The group has adopted Aquino’s four sisters – Pinky, Viel, Balsy and Kris – as honorary members or “mistah.”

“A year after a damages suit was filed in court by the health workers for their harrowing experience, it seems that the wheels of justice have not only stalled but have grinded backwards. The Morong 43 health workers will not take the awarding of a new post to Segovia sitting down and will continue to seek his accountability.” The P15-million civil complaint for damages was filed by members of the Morong 43 on April 5, 2011. Aside from Segovia, the respondents in the case include former President Arroyo, former Defense Secretary Norberto Gonzales, Gen. Victor Ibrado, and Gen. Delfin Bangit.

Months after summons have been issued in the case by a Quezon City court, several respondent military personnel and police officers in the damage suit remained officially unnotified of the charges with the lethargic if not deliberate non-cooperation of the AFP and the Philippine National Police who feign ignorance of their present assignments o even existence in their roster. The civil case is facing all sorts of procedural obstacles and peripheral issues.

“It taunts and ridicules human rights victims. And it only validates the criticism that there is no real internal mechanism to discipline and make accountable those military officers within the AFP that are accused of human rights violations.”

Aside from the civil case, a complaint with the Commission on Human Rights (CHR) filed by the health workers while they were still detained remains pending and unresolved with the rights body . “With the pendency of a CHR complaint clearly not a bar to promotion contrary to existing rules just like during the time of Ret. Maj. Gen. Jovito Palparan, Segovia might very well be another Frankenstein or monster in the mold of spineless fugitive Palparan,” Atty Olalia said. And images of Pres. Arroyo publicly extolling Palparan come to the fore as this is akin to giving Gen. Segovia not only a pat at the back but a premium license to take legal shortcuts, he added.

A criminal complaint for torture for Gen. Segovia and several others had been ready for quite some time and is just awaiting finalization and formal filing through the NUPL, the legal counsel of the Morong 43 together with the Public Interest Law Center (PILC).

“The utter insensitivity of the administration to the grievances of the Morong 43 victims speaks a whole heap about the attitude of PNoy with respect to upholding human rights – indifferent, benighted and complacent,” Atty. Olalia said. “With Segovia’s promotion, a military officer responsible for rights violations is not only left to wander at will but rewarded with undeserved professional advancement. Practically nothing has changed and the system that bred impunity during the Arroyo regime is still in place. Years from now, when another Palparan would rear its ugly head and become almost uncontrollable, we will not relish saying, “we told you so, “Atty. Olalia added. #

By calling yourselves the ‘people’s lawyer,’ you have made a remarkable choice. You decided not to remain in the sidelines. Where human rights are assaulted, you have chosen to sacrifice the comfort of the fence for the dangers of the battlefield. But only those who choose to fight on the battlefield live beyond irrelevance.”  Supreme Court Chief Justice Reynato S. Puno, in his message to the NUPL Founding Congress, Sept. 15, 2007