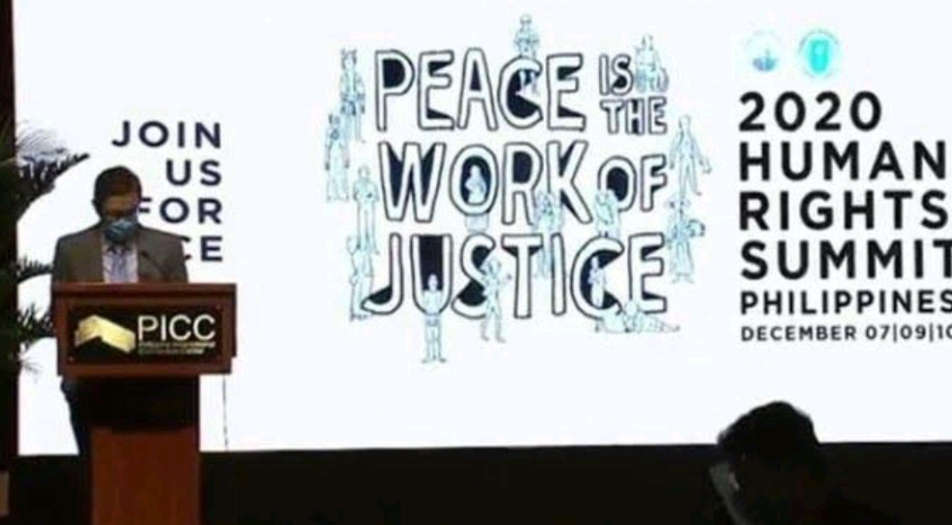 An international rights group called out the government’s “human rights” summit as another platform to save face after gaining global notoriety for human rights abuses. As the world commemorates the 72nd human rights day, International Coalition for Human Rights in the Philippines (ICHRP) supports the Filipinos’ call for credible independent investigation on what’s happening in the country.

“We find it ironic that arrests and rights violations continue in the same week that Philippine government launches a human rights summit. It is clear that this platform is nothing but an extravagant deodorizer aimed at exonerating the state-sanctioned perpetrators from their crimes,” says ICHRP chairperson Peter Murphy.

Last December 2, a land rights defender Amanda Echanis was illegally arrested and planted with guns and explosives by Philippine authorities in Cagayan, north of the country’s capital. Amanda is also the daughter of peace activist Randall Echanis who was assassinated in his home last August. In his most recent tirade, Philippine president Rodrigo Duterte accused progressive lawmakers as communists while failing to offer any proof to back up his allegations.

According to ICHRP, it is alarming that the government is on one hand publicly terror-tagging activists and civilians and on the other speaking of strengthening local and international partnerships on human rights issues.
The global coalition was referring to Justice Secretary Menardo Guevarra’s keynote address in the taxpayer funded human rights summit. Guevarra claimed that the event is a platform for an “earnest, intelligent discourse so that we may strengthen sectoral engagement and international partnerships in addressing human rights challenges.”

“Honestly, this duality of the State smacks of hypocrisy and worse, it comes off as an insult to the thousands victimized by the Duterte government,” says Murphy.

The summit comes 2 months after the United Nations Human Rights Council (UNHRC) passed a resolution providing technical cooperation and capacity-building for promotion and protection of human rights in the Philippines, which took wide criticism from the international community for falling short of mandating an independent international investigation into the human rights situation in the country.

Despite this, ICHRP manifests their support for Filipinos activists and human rights defenders who have been tirelessly advancing people’s rights under the deadly administration.

“We share your disappointment that the momentum for change built up over many years of effort at the level of the UNHRC was stalled and deflected by the Duterte government this year,” says Murphy.

ICHRP together with the international community seeking accountability is stepping it up for a credible investigation to happen. Murphy asserts: “Our response is to initiate the task that the UNHRC should have done, to launch a further independent international investigation of the human rights violations in the Philippines.”

As of this writing, global independent investigations have already been ongoing and will be officially launched this December.#