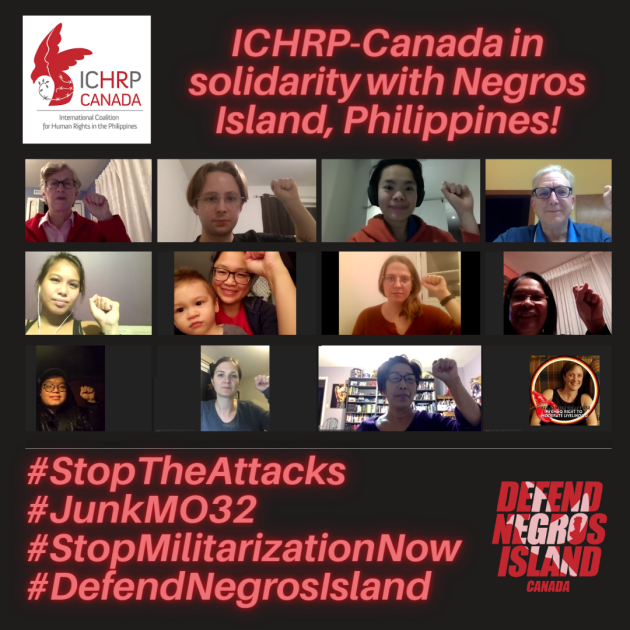 This November 22, the International Coalition for Human Rights in the Philippines – Canada calls for the junking of Memorandum Order No. 32 (MO 32) and the end to lawless state violence on Negros Island, Philippines.

On November 22, 2018, Philippine president Rodrigo Duterte declared MO 32 in response to so-called “lawless violence” in the provinces of Samar, Negros Oriental, Negros Occidental, and Bicol. The memorandum was declared in the wake of several high-profile killings of peasants and activists, including the October 20, 2018 killing of nine members of the National Federation of Sugar Workers in Sagay. MO 32 was supposedly declared in order to “prevent further loss of innocent lives and destruction of property.” In practice, MO 32 allowed for further militarization of these provinces via deployment of additional units of the Armed Forces of the Philippines (AFP) and the Philippine National Police (PNP).

Two years later, it has become clear that the claims of “lawless violence” in the region by the Duterte administration have been used to cover up the lawless violence of the administration itself. To date, the number of peasant and activist lives taken in violent ways has steadily risen, with dozens killed in state-sponsored acts of violence through the AFP and PNP. The experience of de facto Martial Law continues to violently affect the lives of those who are most vulnerable.

On Negros Island alone, at least 50 peasants and activists have been killed under the Duterte administration. Many of these have occurred during the current period of militarization which began with the declaration of MO 32. Oplan Sauron, a supposed counter-insurgency campaign by the AFP and PNP in Negros Oriental, resulted in the killings of 20 peasants within a six-month period in 2019. More recently, the high-profile killings of several individuals on Negros Island drew international condemnation. These include the killings of Zara Alvarez, a healthcare worker and human rights defender; and the brutal beheading of peasant farmer Bernardo Guillen by the AFP.

As peasants try to survive in the primarily feudal economy of Negros Island, the struggle for land continues to affect their lives. An elite ruling class of landlord families and corporations dominates agricultural production on the island. In contrast, the majority of peasants and farm workers do not own any land at all. Organized peasants and workers struggle for their right to land through actions such as “bungkalan”, the occupation and cultivation of idle farmland. In response, state forces enact lawless state violence in the form of harassment, arrests, and killings. The only real guarantee of peace on Negros Island is genuine land reform, which would ensure that peasants in farming and other sectors are able to take control of their means of livelihood.

Although MO 32 purports to “prevent further loss of innocent lives and destruction of property”, it has become clear that the protection of landowners, and the protection of land itself, is paramount over the lives of those who actually work the land. We call for an end to militarization on Negros Island and the implementation of real solutions which meet the people’s needs.