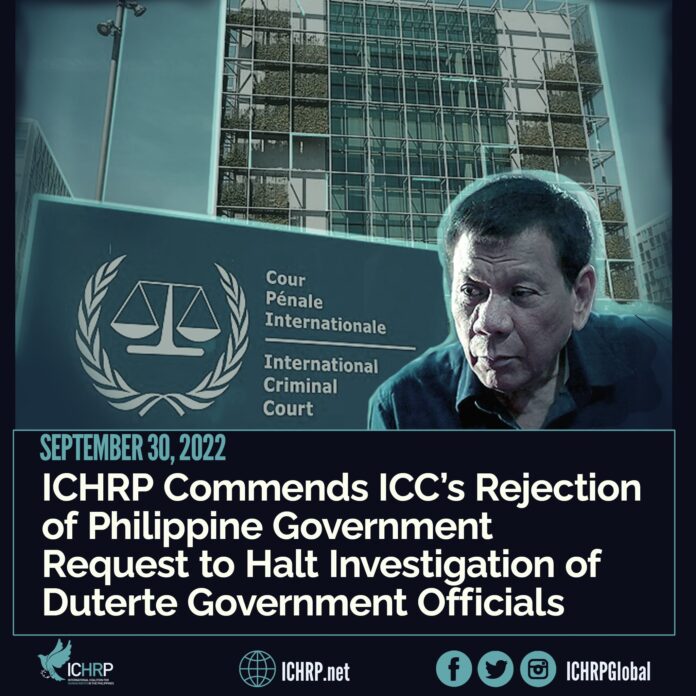 “The International Coalition for Human Rights in the Philippines [ICHRP] applauds the recent decision of International Criminal Court [ICC] Prosecutor Karim Khan to reject the request of the Philippine government to halt the investigation of allegations of serious crimes against humanity committed on its territory related to the Duterte administration’s drug war,” said ICHRP Chairperson Peter Murphy.

“The response of Prosecutor Khan points out the weakness of the November 2021 request of the Duterte government, which argued for suspension of the ICC investigation on the basis of jurisdiction of the tribunal, gravity of the crimes committed, and supposed domestic mechanisms which can investigate and prosecute those involved in the killings,” said Murphy.

“Khan’s response demonstrates that no such domestic mechanisms exist on a wide scale, and that no valid argument exists to dispute the jurisdiction of the ICC in regard to these alleged crimes against humanity. This is in line with the results of INVESTIGATE PH, which demonstrated a severe lack of domestic remedies to the human rights crisis in the country.”

Human rights organizations like Amnesty International estimate that the number of killings under Duterte’s drug war may be as many as 30,000. INVESTIGATE PH, an independent international investigation into the human rights situation in the Philippines carried out by civil society organizations in 2021, presented and analyzed witness testimony and forensic evidence to dispel the Philippine government claims that the thousands of victims were killed by police in self-defence. It also showed that genuine domestic mechanisms to investigate and prosecute the perpetrators of the killings do not exist, despite the claims of the government.

“ICHRP upholds the call of the drug war victims and civil society at large for the cooperation of the Philippine government in the carrying out of the ICC investigation,” said Murphy. “We also reiterate the call of INVESTIGATE PH for other intergovernmental bodies, such as the United Nations Human Rights Council, to launch their own independent investigation into the current human rights situation in the country.”

“The international community must stay vigilant and hold the current and past administrations accountable until justice is achieved for all victims of these crimes against humanity,” Murphy concluded.