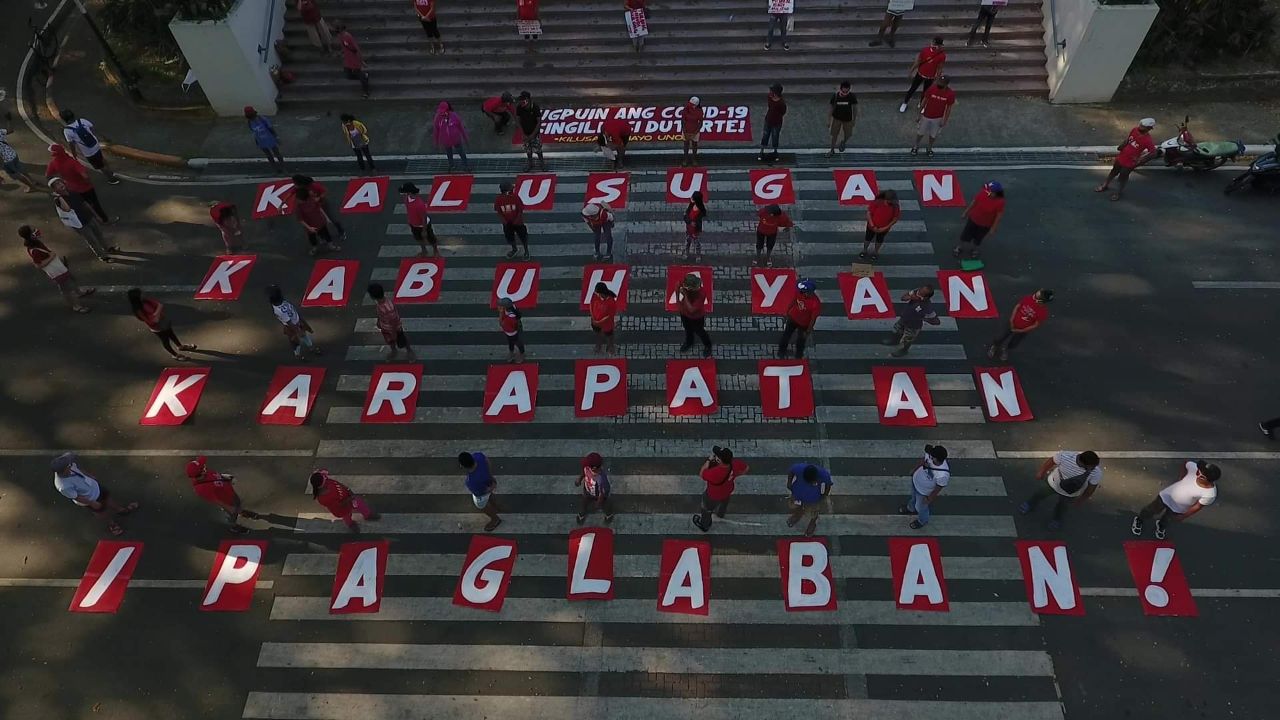 “We are supporting the workers and Filipinos’ fight against Duterte’s tyranny. We have strongly denounced his repressive policies and now, more than ever rejects his Martial Law agenda at the time of Covid-19 pandemic,” says ICHRP chairperson Peter Murphy who also joined protests in Sydney.

The global human rights group noted that on top of Duterte’s bloody human rights record, there is now a more brutal crackdown against civilians and critics. Recently, the Philippines earned the reprimand of the United Nations when it called out governments who used repressive measures to contain the spread of the coronavirus. UN High Commissioner for Human Rights, Michelle Bachelet cited how the Philippines’ “highly militarised response” to the pandemic had led to the arrest of 120,000 people for violating the curfew.

“We deplore that the Duterte Regime has been using Covid-19 as a means of furthering his aims to implement de facto martial law throughout the country,” says ICHRP’s Asia-Pacific spokesperson Sister Patricia Fox.

Filipino organisations who have been extending relief to those affected by the lockdown are being targeted, arrested, and red-tagged by authorities. On the eve of Labor Day,  local community leader Jose Reynaldo Porquia was assassinated. He was leading relief efforts in poor communities in Iloilo City, Central Philippines. “We are denouncing the brutal killing of Porquia. We are one with families and friends in demanding justice. The utter disregard for life and attacks against civilians doing humanitarian work merits international condemnation. We say no more to Duterte’s de facto Martial Law!”, Murphy stressed.

The global human rights group also condemns the recent attacks against relief volunteers and activists during the International Labor Day. A spike in arrests and detention were documented in the country’s capital Manila, in parts of Luzon and Central Philippines:

·  Four youth volunteers of a feeding program and 14 residents of Barangay. Central in Quezon city

·  Ten volunteers distributing food packs in the city of Marikina

·  Four residents of “Protest From Home” in Valenzuela

·  16 workers of Coca-Cola factory were abducted and forced to surrender as rebels in Sta. Rosa, Laguna province

·  42 citizens conducting a caravan and candle lighting for the slain activist Porquia in Iloilo, Central Philippines

“The irony that they’ve been arresting workers and volunteers during Worker’s Day attests to the De facto Martial law being implemented across the archipelago. Relief volunteers should be allowed to serve the poor, more so, workers and activists exercising their right to peaceful protests should be left alone,” says ICHRP.

“While appalling, Duterte’s militarist response to COVID-19 is in character with his violent regime. Four years into his presidency, Duterte continues to shift from policy to policy that all manifest in de facto martial law in the country”, says ICHRP-US spokesperson Drew Elizarde-Miller in their online Labor Day protest. The ICHRP chapter in the US has been consistently campaigning for the end of US military aid that goes to Duterte’s drug war and repressive policies.

In the same series of protests, members of ICHRP Europe also called for the release of political prisoners on humanitarian grounds as the whole world battles the COVID-19 pandemic. As of March 2020, the recorded congestion of Philippine prison facilities is 534% with 133,316 deprived of liberty according to the country’s Bureau of Jail Management and Penology. There have been more than 100 confirmed cases of COVID-19 in these prisons and accounts of under-reporting have raised concerns from ICHRP, Human Rights Watch, and other international groups.

In a recorded video, the same calls to release political prisoners was echoed by ICHRP Canada board member Rev. Japhet Ndhlovy saying that: “Set them free. This is a health crisis and not a militarized situation. They also asserted that the government should address the health crisis by improving health facilities, conducting mass testing for all and providing all the necessary protective equipment for front line workers, instead of intensifying militarization and violence.

“As the global pandemic and economic crisis worsens, we call on our international colleagues to press for the accountability of state forces in the killings and other human rights violations in the Philippines. We should turn our faces to the Philippines as workers, farmers, urban poor and a growing number of Filipinos struggle against a tyrant. The people of the world demand health care and livelihood, not martial law!” Murphy concluded.#

International Coalition for Human Rights in the Philippines