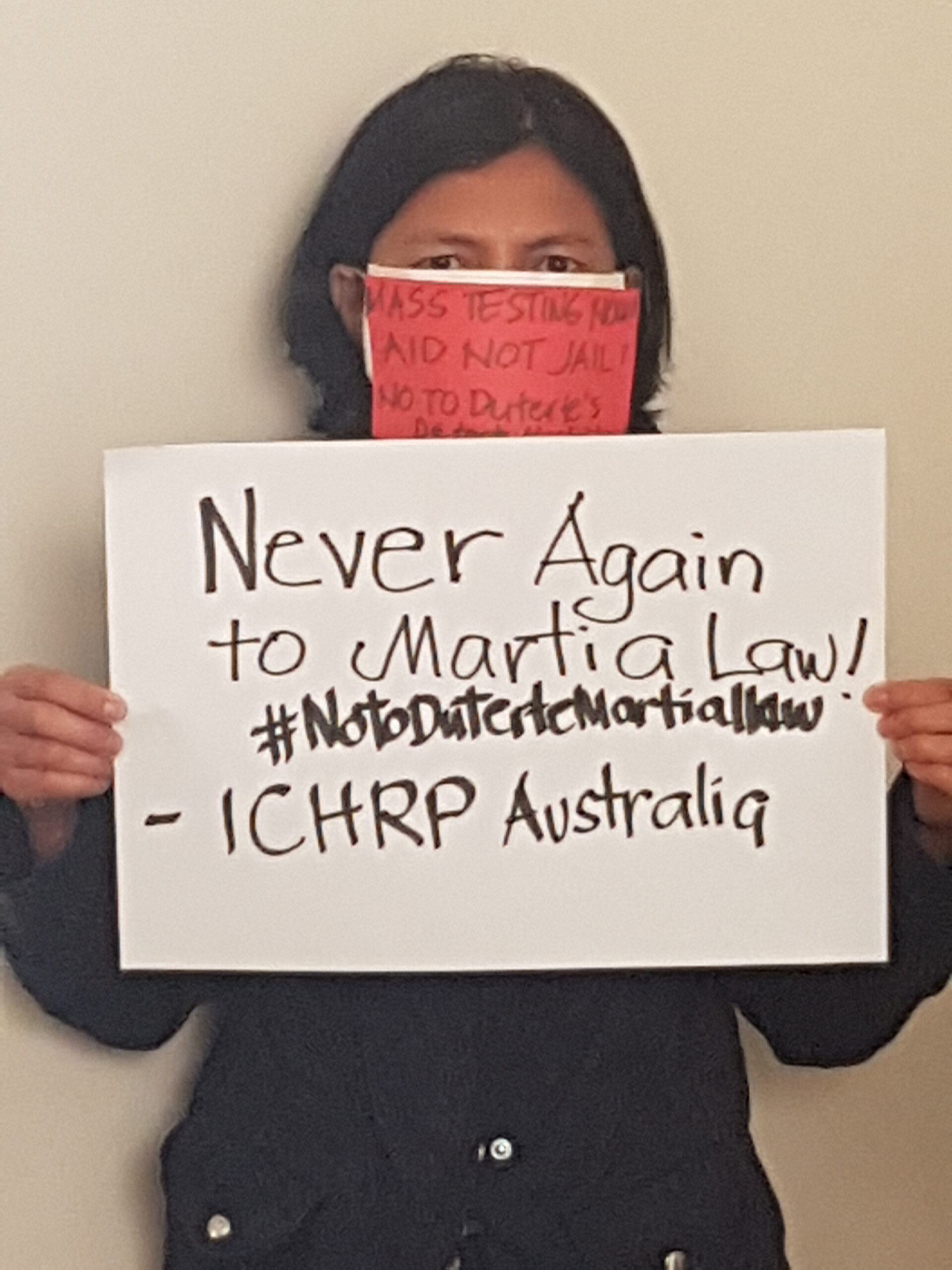 Asia Pacific Coalition for Human Rights in the Philippines

Rather than expediting the distribution of relief goods and financial assistance to impoverished Filipinos, the regime of President Rodrigo Duterte has instead used the COVID-19 pandemic to creep closer towards authoritarian rule.

The Asia-Pacific Coalition for Human Rights in the Philippines (APCHRP) expresses strong concerns that the viral outbreak is being used as a disguise to usher in de facto martial law. This is evidenced by growing crackdown against dissenters and the preference of the Duterte Regime to use military/police action rather than a medical response to the pandemic.

One of the earliest moves of the current regime to respond to COVID-19 was to seek emergency powers from Congress. Despite having ample resources at his disposal to properly stymie the spread of the virus, President Duterte aimed to consolidate more power for his administration.

These extended powers were used to modify the 2020 national budget, repurposing hundreds of billions of pesos for the COVID-19 response instead. Despite the exorbitant amount of funds at their disposal, the Duterte Regime has failed to adequately ameliorate millions of impoverished Filipino households – many have suffered from the lockdown restrictions put in place.

Many of these destitute Filipinos are going hungry, but when they attempt to demand for food packs or financial assistance, they are violently dispersed. A good example is the brutal crackdown of residents of San Roque, Quezon City who were asking for relief assistance – 21 of them were detained by the Philippine National Police (PNP) instead.

Recently, volunteers from Tulong Anakpawis and Sagip Kanayunan who were on their way to distribute relief packages to needy families in Norzagay, Bulacan were unjustly apprehended at a police checkpoint. This group of 7 volunteers and former Anakapawis representative Ariel Casilao were later charged with sedition.

At a time when a multitude of Filipino families are going hungry due to an inept government response, the goodwill and charity of private organisations should be welcomed. Instead, because they have contrasting views with the Duterte Regime, they are being punished.

The present administration’s contempt for activist groups was made even clearer yesterday, when Bayan Muna Iloilo City leader Jory Porquia was senselessly murdered. In the early hours of Thursday 30th of April, Jory was attacked by assailants and suffered nine gunshot wounds – including to the head.

While the motives for his murder are still largely unknown, Jory was known to be an outspoken critic of the Duterte Regime and a tireless activist in the area. He vigorously worked to distribute relief assistance to impoverished families in Iloilo City during the COVID-19 pandemic; Jory devoted his life to serve the people and was repaid with a brutal fate for his beliefs.

The heightened use of military and police strength, the brutal crackdown of activists, and the consolidation of power by the Duterte Regime are akin to the martial law era under former President Ferdinand Marcos. While thousands of Filipinos are becoming sick due to COVID-19, Philippine democracy has also become ill with a virus called authoritarianism.

No less than the United Nations Commissioner for Human Rights, Michelle Bachelet, expressed concerns that some countries – the Philippines included – were “flouting the rule of law in the name of fighting the pandemic”.

Bachelet warned “emergency powers should not be a weapon governments can wield to quash dissent, control the population, and even perpetuate their time in power.”

APCHRP urges the Duterte administration to heed the call of Commissioner Bachelet and to restrain his military and police forces from inflicting human rights abuses during this health crisis. We also strong condemn the heightening violence in the Philippines during the pandemic and call on the government to uphold the rule of law.

The COVID-19 pandemic requires a medical response, not a militaristic one. Expediting the distribution of relief packs and the social amelioration program (SAP) payments should instead be the focus of the Duterte regime, not the imposition of de facto martial law.