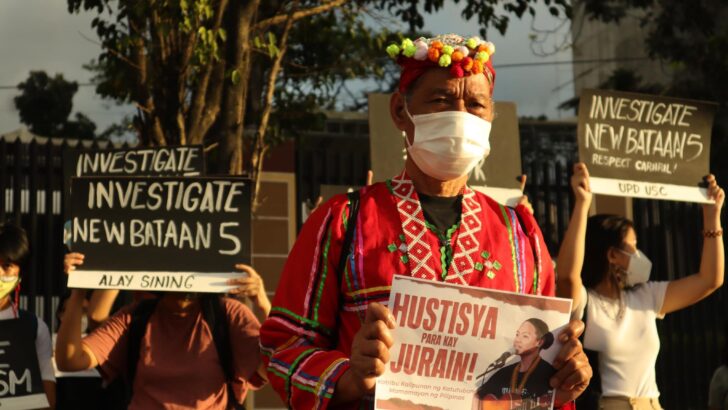 Around 9:30 PM on February 23, 2022, the victims were travelling on their way back to Davao City after conducting field research at New Bataan, Davao de Oro. Elgyn Balonga was able to send a text message asking her family to fetch them. This was the last known contact with the group. On February 25 the 10th Infantry Division posted a press release on their official Facebook page falsely claiming that the five were killed in an alleged encounter and accusing them as New People’s Army fighters. However, information from locals said no encounter took place in the area. The families of the victims learned about the gruesome incident on February 25 because of the press release of the 10th ID.

Chad Booc was a cum laude graduate from University of the Philippines-Diliman with a degree in Computer Science. He was also an environmental advocate, a youth leader and a mentor to fellow youth who are calling for climate action. He became a volunteer teacher in the Alternative Learning Center for Agricultural and Livelihood Development (Alcadev) in Surigao del Sur in 2016. In 2020, he joined Lumad students and datus in Cebu where they sought sanctuary in one of the retreat houses of University of San Carlos-Talamban campus. On February 15, 2021, authorities raided the retreat house and arrested Booc and six others. Police filed trumped up charges against them which were eventually dismissed by the court. He was one of the petitioners against the Anti-Terrorism Law.

Gelejurain Ngujo II was a graduate of Liceo de Davao – Briz Campus in Tagum City with a degree in Secondary Education majoring in English. After graduation, he became a teacher in Community Technical College of Southeastern Mindanao (CTCSM). In 2018, he volunteered to become a teacher for the Bakwit School in Manila and then in Cebu in 2019 and 2020. He was also subjected to threats and intimidation for his work as a volunteer teacher for the Lumad school.

Balonga was a community health worker who served in the United Church of Christ in the Philippines-Haran, a Lumad sanctuary in Davao City, from 2013 to 2018. She facilitated medical students for their internship in UCCP Haran. She was also active in numerous medical missions in remote areas such as Talaingod and Kapalong, Davao del Norte.

Throughout their years of service, Chad, Jurain, and Elgyn had been subjected to threats, harassment, and intimidation, including death threats, red-tagging and terror-tagging, and surveillance, and were a focus of the National Task Force to end Local Communist Armed Conflict (NTF-ELCAC).

Their remains were paraded as trophies, and at this stage the families of the five victims have not been able to retrieve the bodies of their loved ones.

We condemn the bloody massacre of the New Bataan 5 Massacre as a violation of human rights and International Humanitarian Law, call for an immediate and impartial investigation to identify the perpetrators who should then be prosecuted, and call for the respectful return of the victims’ remains to their families. This incident demonstrates the intensified state repression in the Philippines.