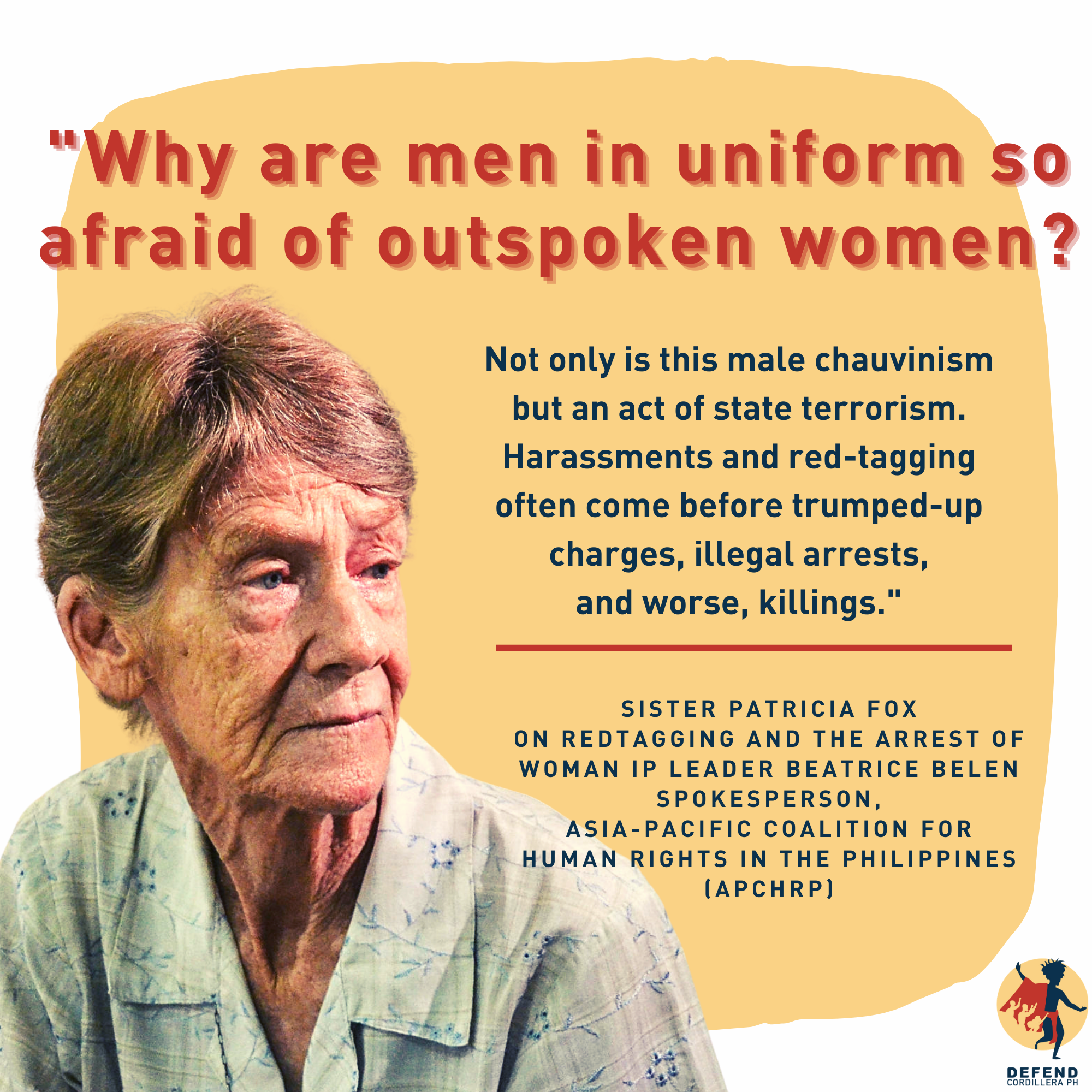 Global organisations and rights advocates condemn the recent arrest of indigenous peoples leader Beatrice Belen of Innabuyog Kalinga, in the Northern Philippines. Groups under the global campaign #DefendCordilleraPH released a statement Tuesday citing the illegal arrest as part of state-terrorism wherein critics of government are first red-tagged as a prelude to graver human rights violations.

“This illegal arrest comes in a time where more women are speaking up against injustices in our society. Belen is a fierce woman local leader in her community and has been defending ancestral lands of the Igorot indigenous peoples,” says Beverly Longid of the International Indigenous Peoples Movement for Self-determination and Liberation (IPMSDL) and convenor of #DefendCordilleraPH.

Gabriela Women’s Partylist and celebrities advocating for women’s rights were recently red-tagged by Lieutenant General Antonio Parlade Jr, warning them that they will suffer the same fate as that of those killed activists.

“Why are men in uniform so afraid of outspoken women? Not only is this male chauvinism but an act of state terrorism. Harassments and red-tagging often come before trumped-up charges, illegal arrests, and worse, killings,” says Asia-Pacific Coalition for Human Rights in the Philippines (APCHRP) spokesperson Sister Patricia Fox who is also active in the global campaign to defend the Cordillera.

Days after the controversial death threats and red tagging of the Philippine general against celebrities and women’s group Garbiela, Belen’s house was searched and planted with evidence. Belen is also former regional vice-chairperson of local women’s group Innabuyog-Gabriela, an affiliate of the Cordillera Peoples Alliance. She is currently detained at the Tabuk City Jail in Kalinga, where she was first placed in a cell with male detainees.

At 4am, Sunday, a team from the Criminal Investigation and Detection Group (CIDG), Philippine National Police (PNP) and the 503rd Infantry Brigade of the Philippine Army served search warrants to Belen and ten other households in Western and Lower Uma, Kalinga. Belen was with her husband and two grandchildren when they were led outside their home and the police started the search, after which three firearms were allegedly seized by the team. Accompanied by her villagemates, she was brought to the Police Station in Tabuk, Kalinga, 463 kilometres north of the country’s capital.

According to #DefendCordilleraPh, Belen, for decades has been actively fighting for indigenous peoples’ rights, leading campaigns to demand military pull out from their communities, and defending their ancestral land against destructive projects of private companies, such as the energy giant Chevron.

Because of this, she has been subjected to red-tagging and threats by the state forces since the time of former president Gloria Macapagal-Arroyo’s Oplan Bantay-Laya and under President Rodrigo Duterte’s Executive Order 70 or Whole of Nation Approach to End Insurgency, the National Taskforce to End Local Communist and Armed Conflict (NTF-ELCAC).

To note, the task force recently obtained an approved budget of 19 billion pesos (391,637,000 US dollars) from the national government while cases of state-sponsored human rights violations like that of Belen intensify on the ground.

“We demand the immediate release of Belen. Red-tagging as seen in her case lead to unlawful arrests and even worse, to state-sanctioned killings.We condemn these kinds of acts from the Philippine government, a clear systemic attack against women especially against indigenous women,” Longid concludes.#