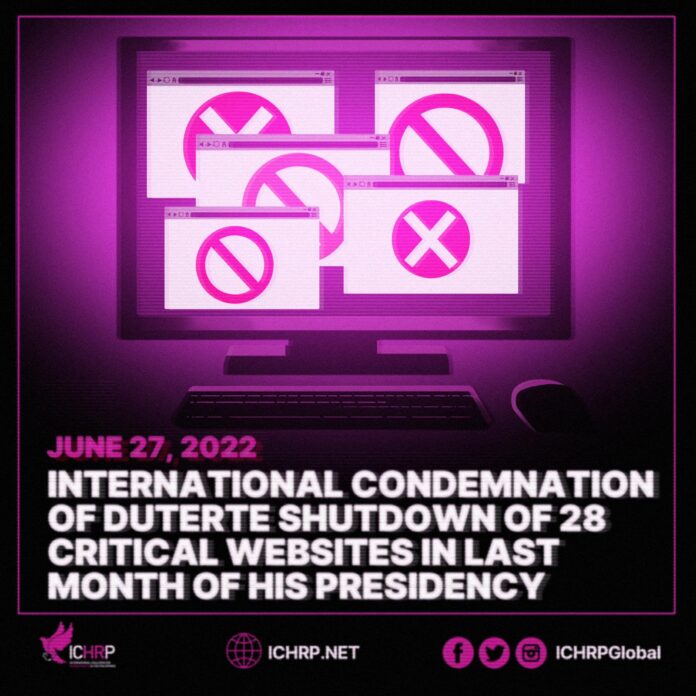 On June 6, 2022, the President’s National Security Council (NSC), on the advice of outgoing National Security Advisor Hermogenes Esperon Jr., called on the National Telecommunications Commission to shut down the sites because they were “found to be affiliated to and are supporting terrorists and terrorist organizations”. On June 8, the NTC dutifully imposed the blocking orders. The NSC is an executive body acting outside any judicial process, and is simply denouncing individuals and organizations as “terrorist” without any evidence being tested.

“Duterte’s suppression of internet communication is a violation of the civil and political rights of the people to freedom of speech and communication,” said Murphy. “This kind of repression is now routinely applied in China, India and Iran, and the international community needs to sharply criticise all these governments.”

Continuing its crude red tagging of legal civilian organizations, the NSC declared that the websites of the National Democratic Front of the Philippines (NDFP) and the Communist Party of the Philippines (CPP) were in the same category as the websites of the religious organisation the Rural Missionaries of the Philippines, the broad network supporting Lumad schools in Mindanao – Save Our schools, the longstanding legal organization of peasant women AMIHAN, the agricultural workers union UMA, the huge multi-sectoral alliance of legal organizations BAYAN, the legal fisherfolk organization PAMALAKAYA, and a string of Filipino news sites that report peasant and worker news – Pinoy Weekly, Bulatalat (listed twice!), Taga-Ilog News, Partisa-News, Peoples Resist News, and Arkibong Bayan, an online photographic archive of legal protest actions.

“ICHRP condemns this order to block the websites of the underground revolutionary movement and the legal groups critical of its anti-people policies as a calculated move against any possibility of renewed peace talks between the incoming Marcos Jr. administration and the NDFP,” said Murphy.

“Renewing the peace talks is the best way to reduce the high levels of political violence in the Philippines, and to grapple with the key social conflicts underlying this violence – land reform, strengthening national economic capacity and democratic reform,” he said.

ICHRP and the international community, through the June 2020 Report of the UN High Commissioner for Human Rights, the Prosecutor of the International Criminal Court, and three reports of Investigate PH in 2021, knows that Duterte is a massive violator of human rights. Democratic institutions in the Philippines and around the world have slammed him for his heinous crimes against humanity in the guise of the “war on drugs” and “war on terrorism”. It is estimated that over 30,000 unarmed civilians have been killed in police and military operations in the last six years.

“No amount of misinformation, disinformation, historical distortion, fake news, and distasteful language can cover that up what Duterte has done and stop the people from exposing the truth,” Murphy said.

“Now that Rodrigo Duterte is set to leave office and lose his immunity, he wants to hide the economic horrors and the continuing brutality towards the poor which reveal the true Duterte legacy: that he and his cronies only enriched themselves at the expense of the people,” said Murphy.

“One big lesson from our longstanding partnerships with Filipino organizations and this year’s Philippine Election 2022 International Observer Mission is that the Filipino people have suffered throughout the Duterte administration, have no confidence in the incoming administration, deeply distrust the political system, and are determined to fight for their rights.

“We in the international community understand that no matter the Filipino people’s patience and resilience, they have their limits. And the greater the repression, the greater the resistance. The banning of these 27 websites will not do Sara Duterte and Marcos Jr. any good, so we urge the incoming administration to not anger the people any further, to withdraw this latest oppressive action,” Murphy said.

“We urge the incoming President to direct his officials to address the daily woes and the deep-seated roots of public dissent: he should support genuine agrarian reform, subsidize agriculture to feed the country, and scrap the oil deregulation law and oil taxes to ease the transport and commuter/worker sector’s daily burden,” he said.

“We know that the progressive people’s organizations who are now being attacked are asserting proposals to solve problem and are ready to cooperate as long as the people’s welfare are genuinely prioritized and addressed,” Murphy concluded.