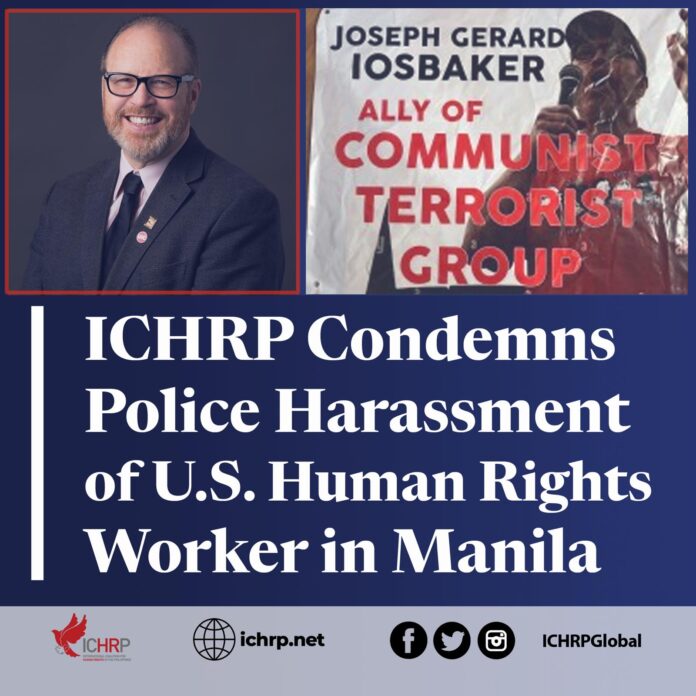 Note: this statement was originally published May 6, 2022

The International Coalition for Human Rights in the Philippines condemns a police red tagging and harassment attack against a human rights advocate on April 10 in Manila. The primary target of this harassment was Joe Iosbaker, an American Human Rights volunteer from Chicago, who arrived in Manila on April 3.

In the afternoon of April 10 three tarpaulins (large vinyl banners) were found in front of the hotel in Quezon City where Joe Iosbaker was staying. More of the same banners hung at a nearby human rights office housed in the United Church of Christ in the Philippines (UCCP) building. The tarpaulins contained the name and a picture of Iosbaker and the text said:

The hotel security guards reported that the CIDG (Criminal Investigation and Detection Group, a branch of the Philippine National Police) had hung the tarpaulins. At that point, concerned for his personal security, Iosbaker transferred hotels and his things were collected later.

Further, at 8.30am that day a small protest group gathered in front of National Council of Churches of the Philippines Building. There was a speaker, they were holding placards and were hiding their faces behind the placards. Written on the placards were – ‘banyagang terorista, alyado ng komunista, layas!” (Foreign terrorist ally of Communists, Out!).

Iosbaker appears to have come to the attention of the CIDG during an April 9 meeting with a partylist candidate, Ms Amirah Lidasan, at a coffee shop in Manila. Lidasan is the third nominee for Bayan Muna (People First) Partylist in the May 9 National Elections. Sadly, it is typical of Filipino politics that a person like Ms Lidasan is considered a national security threat and is placed under such intense surveillance for advocating democratic change.

The CIDG office is in the same building as the National Task Force to End Local Communist Armed Conflict (NTF-ELCAC), not far from Iosbaker’s hotel. The CIDG is described as the primary investigation arm of the Philippine National Police yet their function appears to involve black ops against human rights defenders.

These vinyl banners are a standard form of red tagging in the Philippines, deployed against unarmed civilians by the NTF-ELCAC, to intimidate these civilians into silence and implicitly threaten violent attack. Many people whose images appear on these banners also receive threatening text messages and many have been assassinated. But it is rare for a non-Filipino to be threatened in this way.

Clearly a significant amount of police resources was dedicated to the identification of Joe Iosbaker, the production of materials for the public vilification campaign, and the orchestration of a protest action at the NCCP Office.