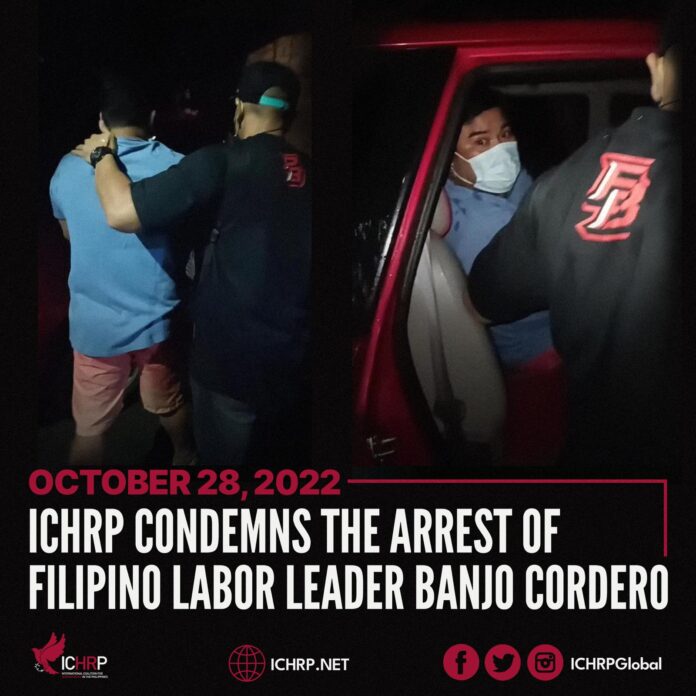 The International Coalition of Human Rights in the Philippines (ICHRP) condemns the arrest of Benjamin “Banjo” Cordero, a trade unionist, labor leader, and Chairman of Sandigan ng Manggagawa sa Quezon City (SMQC). At around midnight of October 26, he was illegally arrested by four non-uniformed police at his home under allegations of frustrated homicide. Cordero was profiled without an attorney for an hour, under the guise of confirming his ‘identity’.

“This is yet another attack against labor leaders. Just recently, Kara Taggaoa and Larry Valbuena of the Kilusang Mayo Uno (KMU) were arrested under patently false charges. This pattern of arresting progressive leaders using trumped-up charges just shows that the Marcos Jr. administration is as desperate to repress any form of opposition from the Filipino labor movement as was Duterte before him”, said ICHRP Chairperson Peter Murphy.

Banjo Cordero is now released on bail, but faces years of court processes before he might clear his name.

“With the continuing severe human rights situation in the Philippines, we reiterate our call for the High-Level Tripartite Mission of the International Labor Organization to investigate the killings of labor leaders and union members. We also urge the International Criminal Court (ICC) to conclude its investigation into the grave human rights violations of the Duterte administration, and take appropriate action”, added Murphy.

ICHRP continues to call for the international community to remain vigilant and to stand in solidarity with the Filipino people by amplifying their calls for justice from the crimes committed by all administrations past and present.