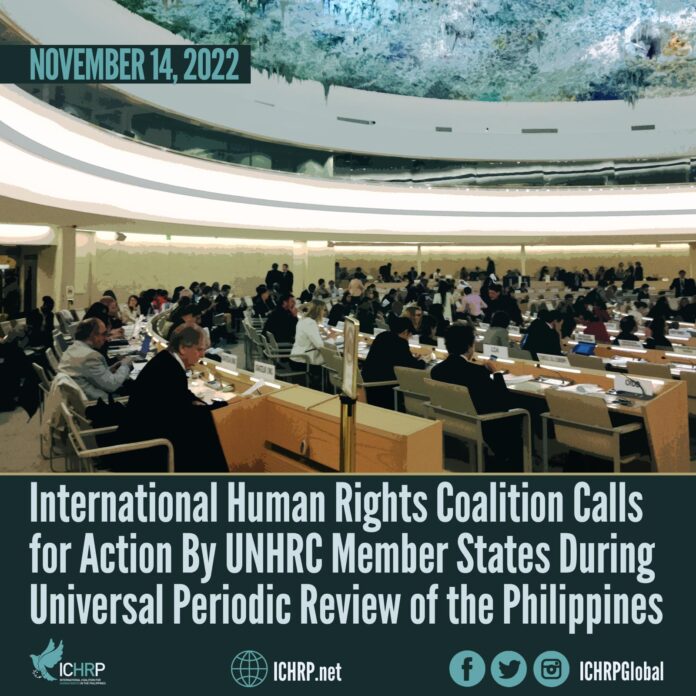 “Members of the International Coalition for Human Rights in the Philippines (ICHRP) are physically present in Geneva, Switzerland to witness the fourth Universal Periodic Review (UPR) of the Philippines,” said ICHRP Chairperson Peter Murphy this Monday morning. “We remain vigilant in advance of the proceedings, and reiterate our calls to all Human Rights Council (UNHRC) member states to respond seriously to human rights violations that have occurred under former president Duterte, and continue under current president Marcos.”

In support of the UPR session, ICHRP released on November 10 the Final Compendium Report of Investigate PH, an international independent investigation spearheaded by ICHRP, which was carried out in response to the dismal resolution of the UN Human Rights Council on “capacity building and technical cooperation” and to create space for the clamor of the victims seeking justice. “Looking back to the report of Investigate PH, we know there is definitive evidence of countless human rights violations under the Duterte administration, and a state of impunity for many of the perpetrators,” said Murphy. “Even the International Criminal Court has recognized some of these rights violations as crimes against humanity. In our opinion, member states of the UNHRC have a long way to go if justice is to be served for these crimes against the Filipino people.”

“Much of the evidence documented by Investigate PH showed systematic violation of the basic economic, social, and cultural rights of the people,” continued Murphy. “Workers and peasants face poverty, landlessness, and job insecurity. Hundreds of workers are driven out of the country every day in search of work. Yet the government of Duterte did little to create a support system for these people.

“In fact, the situation of the people was made worse by constant attacks on their civil and political rights, often perpetrated by state forces; and in creating the National Task Force to End Local Communist Armed Conflict (NTF-ELCAC) which red-tags individual human rights defenders and organizations. Tens of thousands of supposed drug dealers or users, many of whom lived in poverty, were killed in Duterte’s war on drugs. People who advocated for their rights faced red-tagging, arrests, and even extra-judicial killings. Some attacks on the people by the military violated international humanitarian law, as in the case of the use of white phosphorus bombs in Abra, and the shelling of civilian areas in Marawi and Moro areas in Mindanao.

“Given the evidence, it is clear that all UNHRC member states contributing to today’s UPR session have a responsibility to make recommendations to the Philippines which would begin to address the human rights crisis,” said Murphy. “This includes investigation and prosecution of all those responsible for the many rights violations in the past five years.

“Even outside of the UPR recommendations, ICHRP calls on member states to respond seriously to this situation. Under the new Marcos administration, the rights violations and state of impunity established under Duterte continue. In particular, the NTF-ELCAC continues to receive enormous funding under the new administration, which it uses to surveille, intimidate, and attack progressives all across the country. Member states must take serious action and be critical of the brazen human rights violation record of the Duterte government, stop funding the counter-insurgency program of the current Marcos-Duterte administration, and push for a UNHRC-led investigation.”