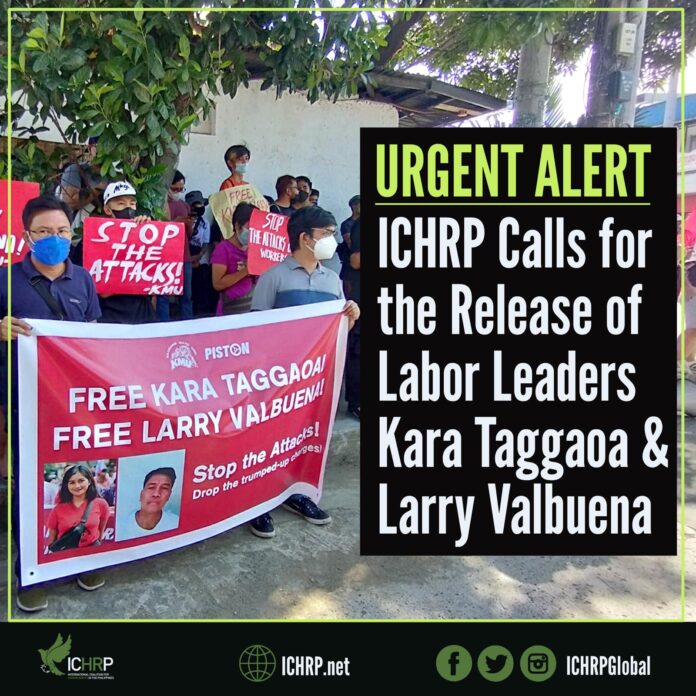 “The International Coalition for Human Rights in the Philippines (ICHRP) calls for the immediate release of Kilusang Mayo Uno (KMU – May First Movement Labor Center) International Officer Kara Taggaoa, and PASODA-PISTON President Larry Valbuena, who were arrested on fabricated charges this Monday, October 10,” said ICHRP Chairperson Peter Murphy. “The two KMU officers were apprehended without warrant on the basis of trumped-up charges of assault, and were not afforded their full rights in the process of arrest. The fabricated charge of assault, as well as a second charge of robbery for which they served their arraignment immediately before the arrest, actually date back to a rally against the Anti-Terrorism Act in 2020. They were denied their right to due process as they were not given a chance to be heard in a preliminary investigation on the complaint against them.

“ICHRP vehemently condemns the use of these fabricated charges by the current Marcos administration to attack and threaten the militant labor center KMU and its officers,” continued Murphy. “The arrest of the two labor leaders demonstrates that the present administration won’t recognize due process and legitimate dissent, and is continuing the repression of workers and all legitimate dissent under the notorious National Task Force to End Local Communist Armed Conflict created by outgoing President Duterte at the end of 2018.

“The international community must stay vigilant in the coming months with the possibility of further attacks on the labor movement. Our call for independent investigation into the human rights situation in the Philippines is more urgent than ever. It must include but is not limited to a high-level tripartite mission by the International Labor Organization to investigate the killings of labor leaders and union members as well as on the violation of the workers’ right to organize unions and to collectively bargain, under the previous Duterte administration and the current Marcos administration.”

The two arrestees face a total bail charge of PHP 136,000 (USD2,300) for the cases of alleged robbery and assault. If you are able to contribute funds to the collective bail fund effort of KMU, you can do so by sending donations the following account: