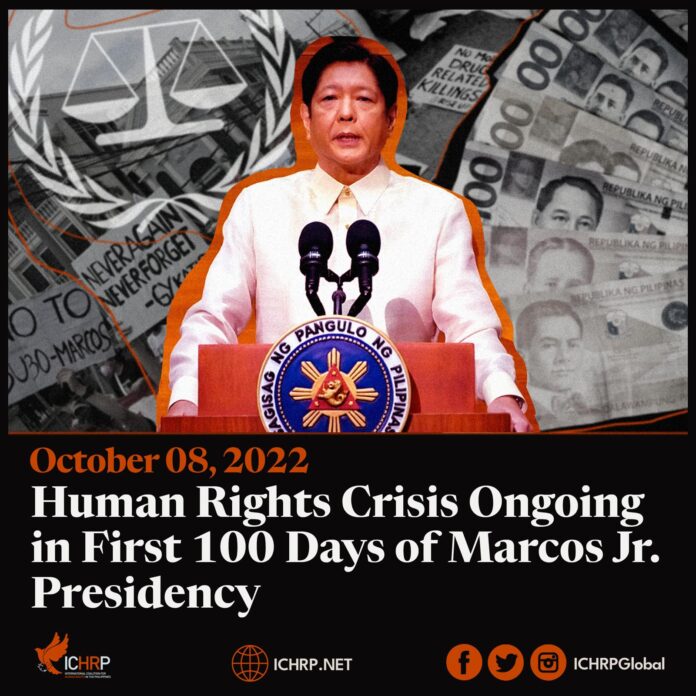 100 days after the inauguration of President Ferdinand “Bongbong” Marcos Jr, the Filipino people continue to suffer crisis and unrest. Following the tradition of his father, Marcos has repeatedly violated and ignored the rights of the Filipino people. The new administration continues to sell out the country to foreign powers while violently suppressing progressive groups who call for change. The International Coalition for Human Rights in the Philippines (ICHRP) calls on the Marcos administration to uphold the civil, political, economic, social, and cultural rights of the Filipino people, and to heed the calls of the international community for investigation and accountability.

Despite Marcos’ complete omission of reports on human rights violations during his State of the Nation Address on July 25, attacks on progressive activists and organizations have continued under his watch. Among the many targeted since June 30 were Gary S. Campos, a Lumad school teacher arrested on July 17; Kyllene Casao, a nine-year-old peasant girl who was shot dead on July 19; and Percy Lapid, a broadcast journalist critical of the current administration, who was shot dead by unknown assailants on October 3. Progressives have also faced red-tagging, as in the case of 16 members of the Rural Missionaries of the Philippines who were charged with providing funds to “terrorist” organizations on August 15. Ominously, Marcos Jr. has boosted the budget of the notorious red-tagging National Task Force to End Local Communist Armed Conflict.

Marcos’ first 100 days in office have also demonstrated a lack of genuine solutions for the economic crisis in the country. The issues of low wages, contractualization, lack of jobs, landlessness, and debt continue to plague the people, and inflation hit a four-year high in September. His economic team are technocrats who will operate interest rate and government spending levers to please markets rather than address the dire needs of the people. Marcos’ recent visits to the US, Indonesia and Singapore in September and October are notable for vacuous statements and little information. The subservience of his administration to the interests of the US is displayed in the current Kamandag naval amphibious exercises between the Philippine and US militaries.

The new administration has also failed to engage in ongoing diplomatic and judicial processes which could provide a solution to the human rights crisis. The call of the international community for independent investigation into the human rights situation, as expressed in the recommendations of Investigate PH (2021) and the International Election Observer Mission (2022), has been ignored so far, and the new government has yet to cooperate with the ongoing investigation of the International Criminal Court into massive civilian killings that took place during Duterte’s ‘war on drugs’. Marcos has also failed to continue peace talks with the National Democratic Front of the Philippines, a process which has potential to end the ongoing armed conflict by addressing its root causes.

ICHRP calls on the new administration to seek genuine solutions to the problems of the Filipino people, and to address the ongoing human rights crisis through both domestic and international mechanisms. We ask the international community to remain vigilant over the next 100 days of the administration, and to continue to campaign for a just and lasting peace in the country.