Assignment of Morong 43 torturer Baladad to 3rd IDPA, a display of impunity under Aquino

“The appointment of Brig. Gen. Aurelio Baladad as commanding general of 3rd Infantry Division of the Philippine Army is an exemplary display of impunity under the Aquino government,” Cristina Palabay, secretary general of Karapatan said. Gen. Baladad is among the military and police officers currently facing civil and criminal charges of torture and illegal detention of 43 health workers known as the Morong 43. 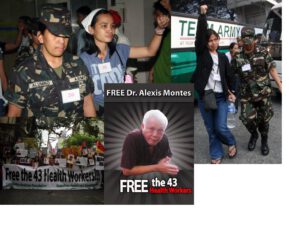 The forty three health workers were illegally arrested in February 2010. They were handcuffed and blindfolded for two days. Dr. Alex Montes said he was electrocuted while blindfolded. He could not walk for several minutes after that. They also underwent psychological torture during interrogations that happened during night time. They were under extreme fear during their captivity because some of them were taken out of detention cells during the night, not knowing where they will be taken to. For several weeks, this has been their set up while under military custody.

“This is the kind of impunity where torturers are promoted and rewarded with plum posts, where they will be in a position to systematically commit more rights violations,” Palabay said. “Baladad’s assignment at the 3rd IDPA indicates the heightening of terror versus the people through Oplan Bayanihan,” Palabay said citing Negros, which is part of Western Visayas, is among those declared by the military as among the first level priorities of the said counter-insurgency program.

According to Karapatan’s documentation, nine out of 142 cases of extrajudicial killings under the Noynoy government’s Oplan Bayanihan happened in Western Visayas, and four out of 16 enforced disappearances are from Negros alone.

“By all indications, the Aquino government is placing known human rights violators and Gloria Arroyo’s military henchmen such as Baladad and even ISAFP Chief Gen. Eduardo Año to Noynoy Aquino’s first line of defense against the people’s escalating discontent,” Palabay said.

It was a year ago that Karapatan filed an opposition to the promotion of Baladad as Brigadier General. He has been since assigned as commanding officer of the 9th Infantry Division PA in Bicol Region, also a priority area of Oplan Bayanihan, and as Deputy Chief of Staff for Operations (J3) of the Armed Forces of the Philippines.

“Thus, with this appointment and promotions of rights violators, the Filipino nation is to expect more human rights violations under the Noynoy Aquino administration,” Palabay concluded. ###