Another Open Letter to President Benigno Aquino: “Look Them Straight in the Eye” 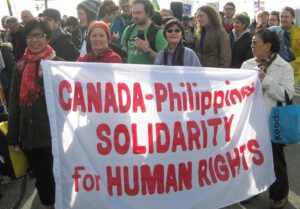 31 July 2012 – Your much-acclaimed State of the Nation Address, “Report Kay Boss,” last July 23 was a big disappointment. On your third SONA, you never even mentioned the white elephant in the room – the human rights situation in the Philippines.

Human Rights violation data (Karaptan) show that during the Arroyo administration, there were 1,205 extra-judicial killings and 206 enforced disappearances. The data also show that in the two years of your administration, there were an additional documented 99 extra-judicial killings and 11 enforced disappearances. These cases do not include the countless number of victims of threats, political vilification, evacuations, torture, rape, and illegal detention. International human rights bodies have similarly documented these violations.

And there was not a word of mention in that address. What does this mean, Mr. President? Does this mean that the concerns of the families of these victims of human rights violations are not important enough to merit attention? Does this not fit your scenario of “where a citizen is oppressed, he will find (you) an ally”? From your speech, I am guessing that it does not.

Does this mean that you are now tacitly in agreement with these military terror tactics? After two years of inaction on your part, the families of the victims of the killings and disappearances are now drawing that conclusion. In her 2006 SONA, then President Gloria Macapagal-Arroyo declared this sentiment when she publicly praised General Jovito Palparan, a notorious human rights violator. Right after your last SONA, you did a similar thing – you designated the Morong 43 torturer Col. Aurelio Balabad to a division command post. I am guessing that you are indeed encouraging these terror tactics.

Or does this also mean that you are so afraid of the military that you dare not mention their dark deeds? You talked tough against corrupt police officials coddled by illegal loggers, but you were meek as a mouse about the bloody acts arising from the military’s Oplans Bantay Laya and Bayanihan. I am guessing that you do not truly believe that the people are your “bosses” because, as I see it, you have higher bosses.

As one of the families of the victims of extra-judicial killings, and on the anniversary of the killing of my wife, I challenge you to “look (us) in the eye” and tell us that my guesses are wrong.