SELDA hits criminalization of political offenses, calls for release of all political prisoners 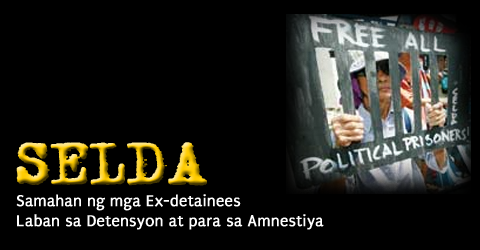 PRESS RELEASE – The Samahan ng mga Ex-detainees Laban sa Detensyon at Aresto (SELDA) today said that the statement of the Armed Forces of the Philippines denying the existence of political prisoners and branding them as “criminals” shows the “total disregard for human rights and violation of the military and the GPH of the standing agreements and jurisprudence prohibiting the criminalization of political offenses.”

Angie Ipong, SELDA secretary general, said that the AFP is actually admitting that it has violated Part III Article 6 of the Comprehensive Agreement on Human Rights and International Humanitarian Law (CARHRIHL) signed by both the government and the National Democratic Front where the GPH should “abide by its doctrine laid down in People vs. Hernandez (99 Phil. 515, July 18, 1956), as further elaborated in People vs. Geronimo (100 Phil. 90, October 13, 1956), and shall forthwith review the cases of all prisoners or detainees who have been charged, detained, or convicted contrary to this doctrine, and shall immediately release them.”

The Hernandez doctrine is an established court ruling that political offenders or those suspected of political crimes should not be charged, detained nor convicted of common crimes.

“I myself am a victim of this violation under the Arroyo government, when I was abducted, tortured, detained and accused of being a top CPP-NPA leader while being charged with criminal cases such as double murder, double attempted murder and arson. These trumped up and fabricated charges were made to keep me behind bars for six years until the charges were dropped by the courts because of lack of evidence and credible witnesses by the AFP,” Ipong explained.

Branding political prisoners as criminals and heaping upon them common crime charges conveniently hide  the political nature of their acts; allow the government to shamelessly declare them as common criminals not motivated by a higher goal, thereby violating these prisoners’ rights even more, Ipong stated.

SELDA also welcomed House resolution 1810 filed yesterday by partylist lawmakers led by Bayan Muna Rep. Neri Colmenares urging the House Committee on Human Rights and the Committee on Justice to investigate the continuous and rampant filing of false and trumped up criminal charges against persons who are politically critical of the government.

What the government is doing in criminalizing political actions is no different from what the US colonial powers did a century ago to patriotic Filipinos fighting for independence.  The American colonizers branded as “bandits, brigands and robbers” such nationalists as Macario Sakay and his men who were resisting imperial domination. “We hope that this government learn from history and stop the practice of discrediting patriots as ordinary criminals,” Ipong concluded.###