P-Noy continues to skirt the issue of Human Rights –Karapatan 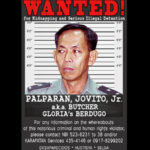 “It has been three months since the fugitive general, Jovito Palparan Jr., was issued a warrant of arrest by the Malolos Trial Court for the disappearance of UP students Sherlyn Cadapan and Karen Empeño yet he remains in hiding with neither a word nor two from the P-Noy government on his whereabouts. We now tend to believe that the warrant of arrest issued to Palparan was just for show,” said Marie Hilao-Enriquez, chairperson of Karapatan.

Hilao-Enriquez added that, “until today, P-Noy continues to hide behind his so-called campaign against corruption to skirt the issue of human rights, along with other people’s issues such as the continuous rise of fuel prices and basic commodities.” Hilao-Enriquez’s statement was in reaction to P-Noy’s speech yesterday before the graduates of the Philippine Military Academy (PMA). “While we are for good government, P-Noy could also have exhorted the new graduates to make sure that they don’t end up like Palparan but he continues to  avoid talking about human rights because his own Oplan Bayanihan pursues the same crooked path and generates  the same impact on the people as Gloria Arroyo’s bloody Oplan Bantay Laya.” said Hilao-Enriquez.

Karapatan also chided the statement of Defense Secretary Voltaire Gazmin that the new PMA graduates will join a “cleaner” AFP. Hilao-Enriquez said, “How can the AFP be ‘clean’ when people like Palparan, whose hands bear blood of people killed in the name of national security, remain unpunished?”

Hilao-Enriquez called on the P-Noy government to “stop showing off and get real” on the issue of human rights. “What good is it that Palparan was issued a warrant of arrest when he remains scot-free? What good is it that GMA was ‘arrested’ but stays in an air-conditioned room in a hospital with the government at a loss on what to do to her? And what good is it to the Filipino people that P-Noy vowed to be the exact opposite of GMA yet sows the same terror and blazes the same bloody path through his Oplan Bayanihan?” ###