NUPL on Palparan’s being a fugitive from justice 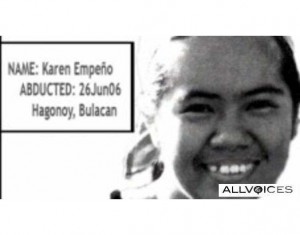 Press Statement – In light of Ret. Maj. Gen. Jovito Palparan’s being a fugitive from justice, his remarks to Judge Teodora Gonzales who issued the warrant of arrest against him, and his criticisms on Justice Secretary Leila de Lima, Atty. Edre Olalia said:

“Palparan is hopelessly incorrigible and his braggadocio is incomparable. The highest military officer ever criminally indicted for human rights violations is now spewing veiled threats versus the judge and venom versus the justice secretary. He has done that to anyone who stands in his way. He must now turn himself in to the authorities and stop being the coward and heartless creature that he really is. He tried to sneak out of the country while the whole nation was sadly riveted by a horrible calamity of tragic proportions. He should face the music and leave the lawyering to his counsels.”

Atty. Olalia is the Secretary General of the National Union of Peoples’ Lawyers (NUPL) and a member of the panel of private prosecutors in the criminal case against Palparan involving the disappearance of UP students Karen Empeno and Sherlyn Cadapan.

Atty. Edre U. Olalia, NUPL secretary-general, on the reported attempt of Ret. Maj. Gen. Jovito Palparan to leave the country this morning:

Days after the release of the DOJ resolution implicating him in the disappearance of UP students Sherlyn Cadapan and Karen Empeno, the bid of Ret. Maj. Gen. Jovito Palparan to sneak out of the country is a manifest attempt to flee justice.

Flight is an indication of guilt. The poster boy of GMA-sanctioned heinous rights violations is obviously pulling a fast one again. He has been lying through his teeth for the longest time and everything that comes out of his mouth is a barefaced lie. As he is guilty as hell, Palparan’s arrest must be done with dispatch. He is as remorseless as he is cunning and arrogant. This latest stunt patently shreds off any of his pretensions.

More than five years and five months after the disappearance of Karen Empeno and Sherlyn Cadapan, the DOJ found probable cause to the charges against Ret. Maj. Gen. Jovito Palparan, Lt. Col. Felipe Anotado, M/Sgt. Rizal Hilario and Staff Sergeant Edgardo Osorio. Finally, Palparan and his cohorts in the military will be tried in court for the crime of Kidnapping and Serious Illegal Detention of the 2 UP students.

Holding Palparan for trial is long overdue amidst the several crimes he perpetrated against activists and those who espouse dissent amidst injustice. While this is just the start of a long and rigorous trial to account Palparan for his crimes, this is a significant victory for human rights defenders and a big step towards ensuring respect for human rights in a country that has witnessed monstrous human rights violations in the past decade.

At long last, justice has caught up with Gen. Palparan and his ilk. The resolution sends a strong, clear and loud message to human rights violators that they cannot just get away with their inhumane acts and that there is no other place for them but behind bars. It should help abet the longstanding climate of impunity, the offspring of the anti-insurgency policy of the state that has no regard for human rights and the law.

We call for the immediate arrest of the perpetrators and ask that the 2 UP students and other victims of enforced disappearances be surfaced. We shall continue to be determined to make other violators like former President Gloria Macapagal-Arroyo and other top civil, military and police officials accountable for their high crimes against the people.#