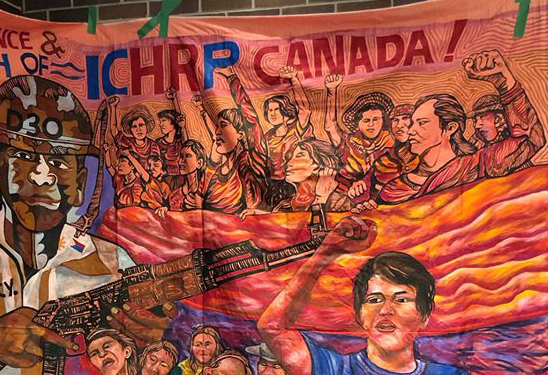 INTERNATIONAL COALITION FOR HUMAN RIGHTS IN THE PHILIPPINES – Canada

On the occasion of International Workers’ Day, ICHRP Canada expresses our solidarity with the workers and the people of the Philippines, and also our profound concern about the growing militarization in communities throughout the country.  We know that the majority of workers in the Philippines only have access to insecure and low-paying work, and as COVID-19 continues to spread, we recognize the impact on the livelihoods of workers and their families is tremendous.

It is the role of the Government of the Philippines to ensure the safety and security of all workers in the country and we call on the government to ensure this becomes the genuine priority.  The implementation of several new laws, programs and policies have now moved the country to de facto martial law.  We deplore the Duterte Regime’s use of COVID-19 as a means of furthering any agenda other than the public health and safety of all citizens.

We have reason to be concerned.  Through “Oplan Kapanatagan” and Executive Order 70 (E.O.70), the Duterte regime has continued to systematically label any workers organizations and groups who organize for their rights, or the rights and welfare of others, pejoratively as “leftists” and “communists”. Targeted organizations include, among others, the Alliance of Health Workers, Federation of Agricultural Workers (UMA), Peasant Movement of the Philippines (KMP), National Fisher Folk’s Organization (Pamalakaya) and the National Human Rights Group, Karapatan.

This reflects both his true lack of interest in the public’s welfare amid a global pandemic and a desire to crush political opponents.  Instead of waging an “all-out war” against the virus through improved health facilities, increasing testing and access to protective equipment for front line workers, he has opted to increase militarization and violence. These labels have resulted in several extra judicial killings and an increasing number of political prisoners.

We are concerned that despite the call of the UN Human Rights Commissioner and even the advice of a Senate Committee to release the most vulnerable prisoners at risk of infection, including political prisoners, no action has been taken.  Instead of showing compassion for the poor who have had to breach the lock down order in order to survive their impoverished circumstances, Duterte has shamefully given the police and the military permission to “shoot to kill”.

The world is watching.  The UN indicated that the Philippines “highly militarized response” to contain the pandemic has led to actions against more than a hundred thousand people for violating curfew ordinances. Over 152,000 quarantine violators had been reported nation-wide by mid-March, of this number 38,000 have been arrested. UN High Commissioner for Human Rights, Michelle Bachelet said detention may even be worse for containing the spread of COVID-19 as detainees are kept in a small place with other violators, validating the observations of peoples’ organizations who claim that public health is not this governments’ priority.  Bachelet concluded by saying “emergency powers should not be a weapon government’s can wield to quash dissent, control the population and even perpetuate their time in power.  They should be used to cope effectively with the pandemic – nothing more, nothing less”.

To further aggravate an already dangerous situation, Duterte has banned organisations other than Government agencies from delivering relief.  Years of austerity and corruption have rendered all levels of governments, including local governments, unable to provide for all their citizens, yet representatives of urban poor communities and several peasant organizations have been arrested for demanding food distribution or delivering relief to agricultural workers who were hungry and in need of assistance.  These actions exposing Duterte’s intent to crush all civil society organisations and individuals who have independent voices and the courage risk their own lives to deliver relief to those most in need are inexcusable.

We call on the Government of the Philippines to:

We call on the Canadian Government to stop military aid to the Philippines, stop the training of military and police, and to stop sharing intelligence, as the country lurches closer to declaring martial law.

We also call on the Canadian Parliament, specifically the Foreign Affairs sub-committee on Human Rights to investigate the human rights situation in the Philippines.NO TO DUTERTE’S DE FACTO MARTIAL LAW!