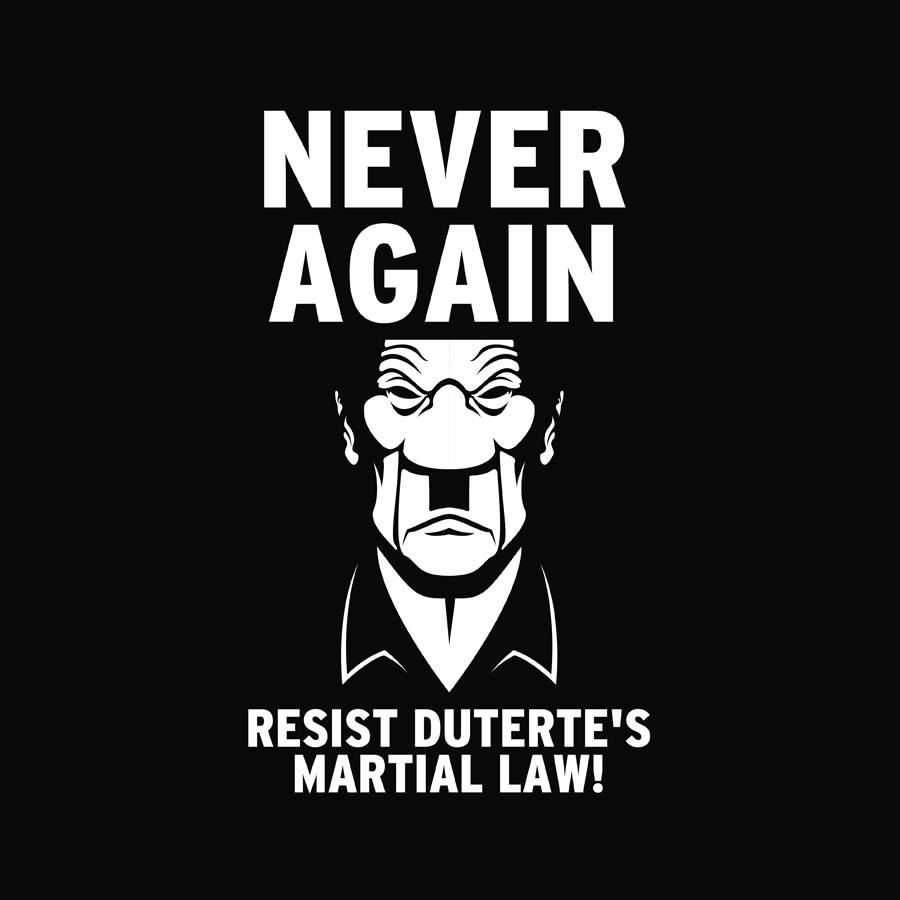 On April 24 President Rodrigo Roa Duterte extended the Enhanced Community Quarantine in some cities, regions, and provinces until May 15, 2020, and the President also threatened to declare Martial Law “if lawlessness continues”. The threat came in the aftermath of claims that communist rebels blocked relief for the people amid the COVID-19 pandemic and took away relief goods intended for Barangay Guinmayohan, Balangiga, Eastern Samar. However, the town’s mayor, along with local officials, deny reports of rebels seizing relief goods.

A narrative of threats by President Duterte pinning the blame to the rebels has been recurring since the pandemic hit the country. As a Philippine Senator aptly pointed out in reaction to the President: “The enemy at the gates today is COVID-19, not insurgency”. Duterte’s words and actions show his deep, underlying desire to crush resistance, the revolutionary movement and its supporters, and thus enforce Martial Law. And the Duterte administration is hell-bent on committing human rights violations with impunity along the way.

Even before the Covid-19 pandemic, President Duterte unleashed the iron fist of Martial Law in Mindanao, the second biggest island of the country, for two years. This led to worse human rights situation–the massive displacement of indigenous people, numerous political killings, military crackdown on unions of agri-workers, and continued illegal arrests. Terror spread to islands in the Central Philippines and turned the province of Negros into a killing field, with massacres and, at one point, targeted extrajudicial killings almost every day.

The Duterte administration has carried out Oplan Kapanatagan and Memorandum No.32, along with local implementing plans, to “suppress lawless violence”. These operations have left behind atrocities to the Filipino people: countless state-perpetrated killings, mostly of civilians, including children; pervasive human rights violations; displacements en masse of the population; and massive destruction of socio-economic resources requiring decades to recover.

President Duterte’s Executive Order No. 70, meant to combat counterinsurgency in the country, created a National Task Force to End Local Communist Armed Conflict with a “whole of nation approach.” It has, according to the government’s Commission on Human Rights, “been consistently used to justify threats and intimidation of individuals and organizations working for the improvement of the human rights and welfare of various marginalized, disadvantaged, and vulnerable sectors of society.” All these speak of a de facto Martial Law in the country.

The International Coalition for Human Rights in the Philippines (ICHRP) has strongly denounced Duterte’s repressive policies and now, more than ever rejects his Martial Law agenda at the time of Covid-19 pandemic. It will only cause greater hardships for the Filipino people who are already suffering from the slow, inadequate, uncaring, and militarist response of the government to the health crisis. Keeping the people safe from the coronavirus is not a license to disregard basic human rights. As the United Nations Secretary-General Antonio Guterres said, “Taking advantage of the coronavirus pandemic to erode human rights would be unacceptable.”

Last April 1, Duterte ordered the military and police to “shoot-them-dead,” an order to kill violators of the coronavirus quarantine. This death threat was immediately followed by an upsurge of human rights violations by state forces across the archipelago. A farmer Junie Dungog Piñar from Southern Philippines was shot by military men for violating the COVID19 lockdown three days after Duterte’s shoot-them-dead order. Another farmer, Noel Galvez from Barangay Buluan, Cabilga, West Samar was tied like an animal and tortured before he was killed last April 18.

With Duterte’s marching orders, authorities have been detaining homeless people, putting curfew violators in dog cages, and using torture and humiliation to punish them, even arresting citizens over “provoking” posts on social media. The most recent case was that of a mentally-challenged war veteran from the Marawi siege shot dead by the police at a quarantine checkpoint in broad daylight.

Meanwhile, the calls for sustained economic relief to the most affected sectors, mass testing – a comprehensive pro-people plan and health-based approach to the crisis – is yet to be drawn up. And sadly, civilians who have initiated community-based relief operations have been arrested and red-tagged.

The anti-poor statements continued. The government blamed “hard-headed” poor people for having the most cases of COVID-19 in South-east Asia. Now the narrative of blame has shifted, as Duterte imputes his own failure to the rebels and threatens anew to impose martial rule.

These abuses of the ordinary Filipino’s dignity and basic rights have been called out by human rights organizations of world repute, such as Amnesty International. UN Secretary-General Guterres warned governments of “further erosion of trust in public institutions if people perceive that their authorities had mishandled response or were not transparent.”

Our task: support the people’s fight against Duterte’s tyranny

With the eradication of the dreadful Covid-19 disease not in sight and its spread far from being contained; as the world’s peoples are continually beleaguered by fear of getting infected or re-infected; as the Philippine public health system continues to be fragmented; as the Filipino masses are restlessly anxious about where to get food for the next meal; as the world faces an inevitable post-COVID-19 global economic crash in the years ahead; and as the government remains hell-bent on employing fascist and other repressive measures, there will be unrest and resistance.

ICHRP, compelled by its commitment to campaign for human rights and Filipino people’s rights, denounces the de-facto Martial Law and will resolutely support the people’s legitimate struggle against Duterte’s tyranny. We support the following immediate demands:

3. Protection and care for all health workers

4. Food, not bullets nor torture, for farmers

5. Sustained economic relief for the urban poor, workers’ sector, and other impoverished households

6. End suppression and red-tagging of legal and democratic organizations; maximize their capacity to deal with the crisis.

a.  Reach out to other organizations, institutions of influence, members of parliament, to speak up on the issue and support the cause

2.   Lobby to foreign ministries, parliaments, international institutions to raise the alarm on the occurring de facto Martial Law amid the Covid-19 pandemic

a.  Prompt key officials to give higher forms of response to the cases of human rights abuses and imposition of Martial Law

b.  Utilize all persuasive means and explore resourceful ways of communicating with them (phone call barrage, coordinated emails, etc.)

3. Launch online actions building up to the May 1 event and onwards by initiating online gatherings and events that will feature the current situation in the Philippines and the need to fight Duterte’s Martial Law

The International Coalition for Human Rights in the Philippines calls on all its members worldwide and appeals to all other organizations, groups, and individuals in the international community to join the Global Day of Action against Duterte’s Martial Law this coming 1st  May.

We urge you not to miss this opportunity to be in solidarity with the struggling communities in the Philippines.