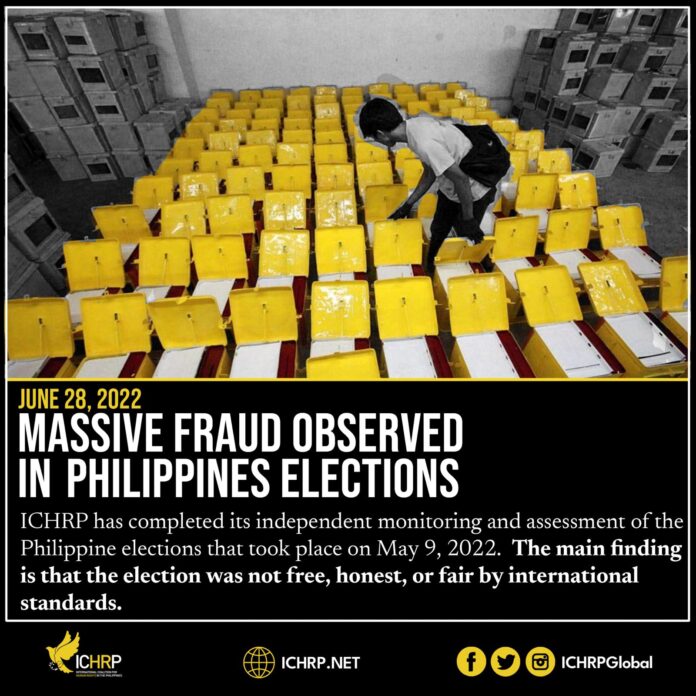 The Final Report of the Philippine Election 2022 International Observers Mission was released on June 28, 2022, and presented at two online media events the same day. Access the report here.

The International Coalition for Human Rights in the Philippines (ICHRP) has completed its independent monitoring and assessment of the Philippine elections that took place on May 9, 2022. The main finding is that the election was not free, honest, or fair by international standards. It was a classic ‘guns, goons, and gold’ contest and marked by a successful massive social media campaign to rebrand the kleptocratic Marcos family’s brutal dictatorship as the golden age of Philippine politics. The return of the disgraced Marcos family to center stage in the Philippines is consistent with the feudal dynastic system that is the centerpiece of political life in the country.

The Philippine Election 2022 International Observer Mission (IOM) was established as a response to Investigate PH’s independent international investigation into human rights violations in the Philippines. The IOM has had over 60 observers from 11 countries on the ground since April 1, who have meticulously documented the campaign, the vote, and the aftermath in various areas including Central Luzon, National Capital Region, Southern Tagalog, Southern Luzon, Central Visayas, Western Visayas, Eastern Visayas, and Mindanao. IOM observers included members of national parliaments, lawyers, trade unionists, church people, youth and students, educators, scientists, and human rights advocates. At various times, the IOM observers themselves were subjected to harassment and red-tagging by the police and military.

“The observers reported that the May elections showed a higher level of failure of the electronic voting system than ever before, along with a higher level of blatant vote-buying, a disturbing level of red-tagging of candidates and parties, as well as a number of incidents of deadly violence. A large number of voters did not get to cast their vote, and many had to trust that election officials would later put their marked ballot paper through a Vote Counting Machine, thus undermining the secrecy of the vote,” said Lee Rhiannon, former Australian Senator and Commissioner of the IOM.

Massive Fraud and Failure of The Democratic Process

The main conclusion of the IOM is that the recent Philippine national elections were a failure of the democratic process. The elections took place in the most repressive context seen since the time of dictator Ferdinand Marcos. Military and state officials openly campaigned against the opposition by red-tagging the Leni Robredo campaign, as well as other candidates for Senate and partylist groups. “Throughout the election campaign, the Duterte government continued its orchestrated campaign of state terror. As part of its war on dissent, the government marshalled the entire machinery of government, including the judiciary, the military and police; and government departments of education, social services, and local governments,” said Danilo Arao of the anti-election fraud organization Kontra Daya. The IOM observed soldiers in Eastern Visayas up to the election day intimidating people not to vote for Bayan Muna and other progressive party lists.

The May 9 election did not meet the standard of “free, honest, and fair” because of these prevailing conditions. It robbed voters of access to reliable information, access to voting places without intimidation, and a credible vote counting system. The IOM has reported election-related violations of human rights since early March in the form of political killings, shootings, abductions, death threats, political arrests, harassment and surveillance of candidates and supporters, large-scale red tagging, widespread vote-buying, media manipulation and repression, fake news, and harassment of journalists by the Marcos campaign. IOM researchers identified that the 2022 election results were the first time in five presidential elections in the Philippines that the number of votes garnered by an Automated Electronic System (AES) president is higher than the number one AES elected senator, suggesting massive fraud.

“The tendency towards a one-party state evident under the Duterte regime was omnipresent in the results of the May vote. In essence it was an exercise in para-military democracy fused with a system of feudal dynastic rule,” said Chris Ferguson, IOM Commissioner and former General Secretary of the World Communion of Reformed Churches. While there remain many political parties, most pay fealty to the Marcos-Duterte bloc. The opposition was all but wiped out in the Senate, with only one of the 12 candidates elected not allied with the Marcos-Duterte bloc in one way or another, and 3 political dynasties now controlling a quarter of the Senate seats. Similarly, the partylist system has been corrupted by dynastic politics to the point where only a shrinking sliver of the successful groups represent disadvantaged or marginalized sectors in Philippine society. “The partylist system should return to its intended purpose because now it is yet another failed attempt to democratize the Philippine political process,” continued Ferguson.

The results of the May election are the latest in a series of chronic failures of the Philippine political system to offer the economic and social reforms required to advance social rights and speaks to the need for major reform. These political reforms required to democratize the Philippine polity include removing the feudal family dynasties from politics, reviewing the efficacy of the AES and renewing the partylist system to give a greater voice to the marginalized and dispossessed sectors.

“For the international community and proponents of human rights, the results of the election represent a worst-case scenario. ICHRP’s concern is that the new Marcos-Duterte government will continue to provide legal and legislative cover for past and future human rights violations and crimes against humanity,” said Rev. Michael Yoshii, Commissioner of the IOM and member of the ICHRP Global Council.

Yoshii continued, “the return of a Marcos to the presidency and the virtual elimination of legislative opposition represents a huge challenge for the international community. There must be a renewed effort to strengthen civil society and the organizations representing the popular sectors. A renewal of the democratic foundations of Philippine society will be essential to combating the pervasive authoritarian tendencies in Philippine society.” This ultimately means elimination of oppressive institutions such as the National Task Force to End Local Communist Armed Conflict and reducing the role of the military in public affairs, both of which played such a strong anti-democratic role in the electoral process.

Monitoring and Reporting of the International Community

“Looking forward, there needs to be an intensified international focus on the new Marcos-Duterte government and their ongoing human rights record. The international community needs to strengthen the capacity of internal and external human rights organizations to monitor and report on the situation in the Philippines,” said Peter Murphy, Chairperson of the ICHRP Global Council.

“At the same time, the international community should continue to hold the outgoing Duterte team accountable for its abysmal human rights record. This work is underway at the International Criminal Court, and in the United Nations Human Rights Council processes, and can be pursued in national jurisdictions with Magnitsky-style laws. There should be no hint of a green light for continued human rights violations under the incoming Marcos-Duterte administration,” Murphy concluded.

The Commission of the International Observers Mission is: