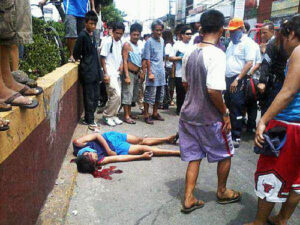 The End Impunity Alliance, Promotion for Church People’s Response, and Karapatan vehemently condemned the massacre and violent demolition of residents of Silverio Compound in Paranaque City this morning, as the 23,000 population of the said area defended their legitimate right to housing against the so-called “development plans” of the local government and SM mogul Henry Sy.

According to Karapatan National Capital Region (NCR) paralegal team, four residents were killed in the violent demolition today, one of them is resident Arnel Tolentino, 36 years old. Three others are still unidentified.

Meanwhile, two minors identified as Bodging Isaias, 16, and Rodman Ortega, 16, reportedly sustained gunshot wounds. Some 36 were wounded and 30 were arrested. All these violations were instigated by elements of the Southern Police District of the Philippine National Police.

“Indeed, Henry Sy and his cabals in his big corporate mafia are not only responsible for environmental degradation in Baguio, but also for the rights violations which occurred today during the demolition in Paranaque and the utter greed that comes with their forced eviction of residents who have legitimate claim to their homes,” said Lourdes Villarias, chairperson of Karapatan-NCR.

The incident occurred while internal refugees from Mindanao and Negros and human rights advocates were gathered in a national conference on internally displaced persons in Quezon City.

Nardy Sabino, secretary general of the Promotion of Church Peoples Response, said “while farmers and indigenous peoples are being driven out of their lands and homes because of military operations, urban poor communities are demolished.”  Sabino said they both experience the same harassment and violence from state forces.

“Such impunity reigns, the violence and terror amongst the urban and rural poor, when the Aquino administration promotes its Public Private Partnership program which gives credence to private corporate interests such as that of the SM Development Corp. over the rights of the poor. We challenge Aquino to make accountable Paranaque Mayor Florencio Bernabe Jr., the PNP, and Henry Sy for these violations on the political and civil rights of the peoples and their right to housing,” stated Cristina Palabay, convenor of End Impunity Alliance.

Karapatan, PCPR and End Impunity alliance called on the Supreme Court to immediately rule in favor of several urban poor residents’ petition filed in March 23, 2012 for a moratorium on demolitions, especially in the light of the violence that comes with these forced evictions.

The groups will be conducting today a solidarity action at 6pm in front of the Christ the King Seminary (E. Rodriguez Avenue corner Gilmore Street, Quezon City) to condemn the PNP-instigated violence in Silverio Compound, Paranaque. They will be joined in by victims of demolition in Brgy. Corazon de Jesus, San Juan. ###