Karapatan to P-Noy and AFP: Bring out and Jail Palparan 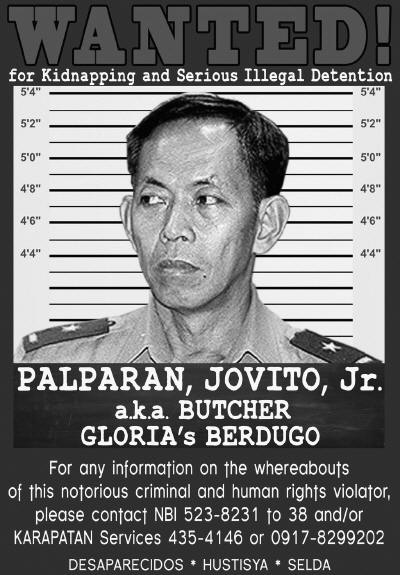 Media Release, April 20, 2012 – Karapatan spokesperson and End Impunity convenor Cristina Palabay today said that “with the recent Order of the Malolos Regional Trial Court denying Gen. Jovito Palparan’s  Omnibus Motion for preliminary investigation, to quash/recall the warrant of arrest, hold departure order, and to suspend proceedings, it is more incumbent now on Pres. Noynoy Aquino and the Armed Forces of the Philippines (AFP) to bring out Palparan from hiding, and immediately arrest and prosecute him and M/Sgt. Rizal Hilario.”

Karapatan today received a copy of Malolos RTC’s Omnibus Order dated April 3, 2012. With this Order, the Malolos RTC has set the arraignment of accused Lt. Col. Felipe Anotado, Jr. and S/Sgt. Edgardo L. Osorio on April 23, 2012. Palparan could not be arraigned until he surfaces from hiding and submits himself to court proceedings. “The burden of going after human rights violators and criminals such as Palparan lies on Aquino and the AFP, lest they be accused of coddling rogue fugitives,” said Palabay.  It has been four months since Palparan went to hiding to prevent arrest and detention.

“While it is so easy for the government to promote torturers of the 43 health workers such as Col. Cristobal Zaragosa, Lt. Gen. Jorge Segovia, and Brig. Gen. Aurelio Baladad, we wonder what is taking the government so long in arresting and prosecuting these rabid rights violators?” commented Palabay.

Palabay concluded that, “with the prevalent state of impunity in the country, where the moneyed and powerful are insulated from accountability, it comes as no surprise if the protectors and coddlers of Palparan come from the AFP itself.” ###