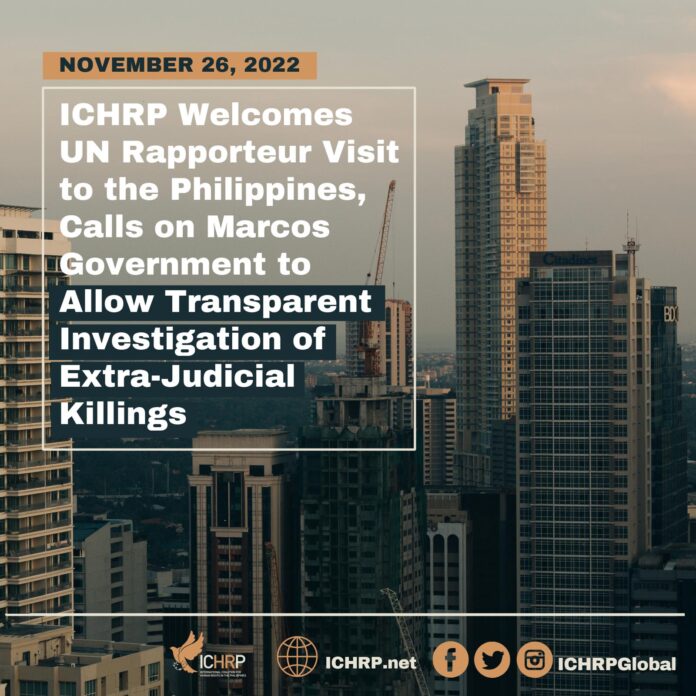 “The International Coalition for Human Rights in the Philippines (ICHRP) welcomes the recent announcement by Philippines Justice Secretary Jesus Remulla that UN Special Rapporteur Morris Tidball-Binz, a forensic doctor, will visit the Philippines next year,” said ICHRP Chairperson Peter Murphy this Saturday. “As Special Rapporteur on extrajudicial, summary, and arbitrary executions, Tidball-Binz’s visit would be an important next step in the process of seeking justice for the thousands of victims of extrajudicial killings under the previous Duterte government, as well as the current Marcos government.”

As reported by Investigate PH, in which Philippine forensic expert Dr. Rachel Fortun served as one of the expert witnesses, tens of thousands of extrajudicial and arbitrary killings took place under President Duterte. A majority of these took place in the government’s “war on drugs”, which mobilized police officers and vigilante groups to kill as many as 30,000 suspected drug dealers or drug users. The Philippine National Police admit to over 6,600 such killings. But despite the abundant evidence that these killings took place, only 25 police officers have been charged so far in relation to the war on drugs, according to Secretary Remulla’s report to member states of the Human Rights Council on November 14.

Other targets of EJKs under Duterte’s war on dissent were human rights defenders, journalists, lawyers, Indigenous leaders, peasants, and labor leaders. Even under the new Marcos administration, these killings continue: recently radio journalist Percy Lapid was killed in a plot allegedly orchestrated by a senior government official.

“Given this recent announcement, we reiterate our call to the Marcos administration for open, transparent, and thorough investigation of these crimes, and justice for all victims and their families,” continued Murphy. “This means investigation and prosecution of all perpetrators of such crimes, and an end to the state of impunity which has allowed so many members of the police force to avoid prosecution so far. ICHRP also echoes the call of at least ten Human Rights Council member states to the Philippine government to re-join the International Criminal Court and cooperate with the ICC’s ongoing investigation into the crime against humanity of murder during the so-called war on drugs.”