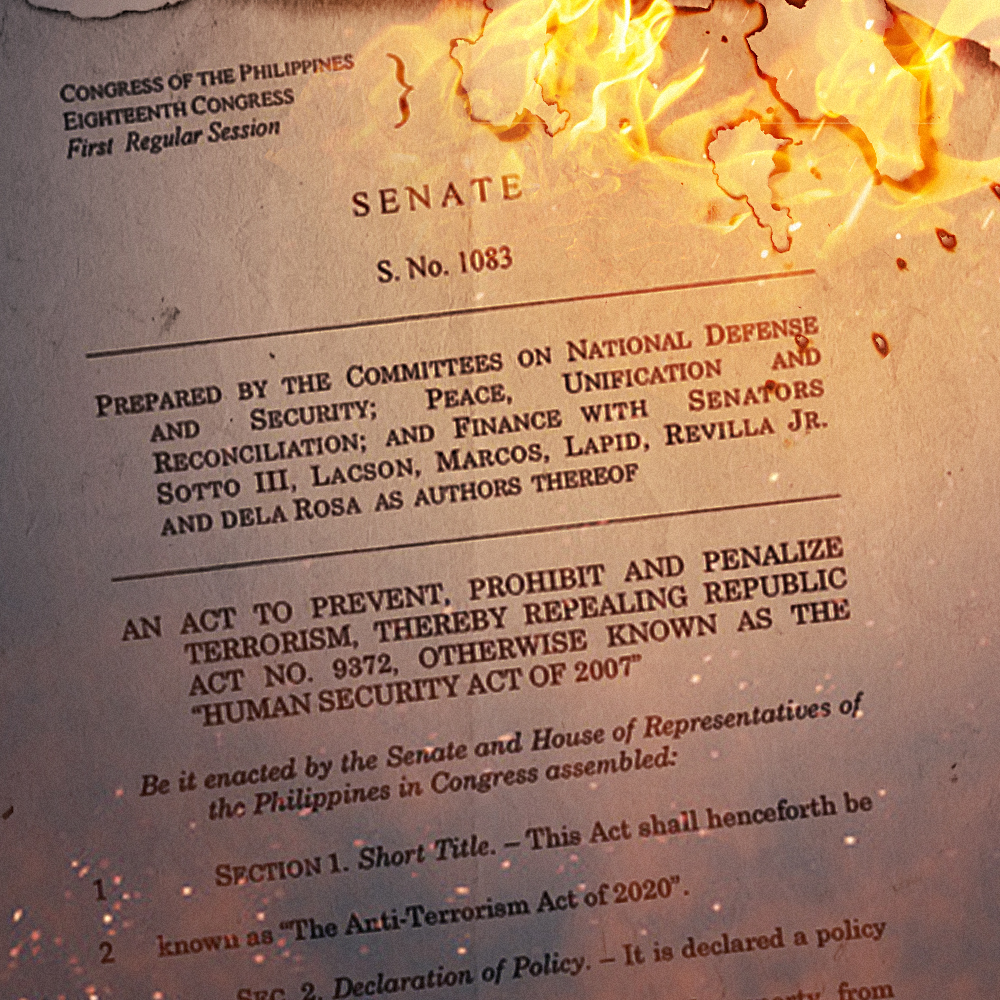 The International Coalition for Human Rights in the Philippines (ICHRP) alerts the global community to an all-out escalation of rights abuses with the railroading of the latest Anti-Terrorism legislation. A proposed law that claims to supposedly curb terrorism was fast-tracked by lawmakers last May 29 amid the country’s battle against COVID-19 pandemic.

“We are appalled that the Philippine government is giving priority to repressive legislation but remains bungling in addressing the pandemic. We have seen too many deaths both from the virus and the violence President Duterte has unleashed against his people,” says ICHRP chairperson Peter Murphy.

The day the repressive law took the limelight, the nation reported 1,046 new coronavirus cases, a new record high since it started counting in January. As of May 30, the reported COVID-19 cases have ballooned to 17,224 because of localized transmissions, with the total number of confirmed deaths at 950. No mass testing has been carried out and the highly militarised lockdown imposed in the capital and other parts of the country has cost the Philippine economy 5.8 percent of its gross domestic product (GDP), the worst in the Southeast Asia region.

ICHRP reiterated that the proposed Anti-Terrorism Bill is the last piece of the puzzle of the Duterte government’s martial law. President Duterte has repeatedly denied the existence of martial law during the pandemic however, the rising number of activists and civilians being jailed, harassed, and killed says otherwise. ICHRP led a global day of protest last May to denounce the de facto Martial Law in the country.

The Anti-Terrorism Bill, dubbed by critics as the “terror bill”, seeks to bolster the country’s current Human Security Act (HSA), a repressive law that has been repeatedly used to justify arrests and file trumped-up charges against activists and government’s critics. If made into law, the new version would allow violations against the right to security and privacy, curtailment of the freedom of expression, freedom of association, and the right to due process. It legalizes warrantless arrests, detention for up to 30 days of suspected terrorists, and even wiretapping and other surveillance for extended periods of time.

“The terror bill erodes the freedoms and liberties of Filipinos which are inalienable, guaranteed by their Constitution and the Universal Declaration of Human Rights and other internationally agreed-upon instruments to which the Philippines is a signatory,” ICHRP asserts.

ICHRP condemns the recent murder of urban poor leader Carlito Badion whose body was found in the Central Philippines last May 28. Two days before his assassination Badion was red-tagged and received death threats. “We have seen the political killings; heard the accounts of survivors and family members; and felt the growing discontent of Filipinos. It is the activists and citizens like Badion who are the true targets of the terror bill,” says Murphy.

Activists, frontline food producers, and volunteers doing humanitarian work have been killed during the lockdown including a 25-year-old artist Marlon Maldos,  and peasant leaders Nora Apique from Southern Philippines, John Farochilin and Allan “Mano Boy” Aguilando from Central Philippines. On the eve of Labor Day, local community leader Jose Reynaldo Porquia was assassinated – he was also leading relief efforts in poor communities in Iloilo City, Central Philippines. All these individuals were red-tagged by the Philippine government and had received death threats.

ICHRP pointed out that President Duterte and his military government has found a way to institutionalize the war against dissent by railroading the terror bill. “The Philippines has the longest and most militarized response to COVID-19 in the world. This terror bill, if signed into law, is a rubber stamp to an already undeclared military rule and will only legalize the targeting of critics and civilians,” Murphy said.

Last year, Philippine Security Adviser Hermogenes Esperon Jr. described the current HSA as not “user-friendly,” and asserted that they need a better tool for anti-terrorism and anti-insurgency campaign. Saying that martial law experience in Mindanao has a “lot of limitations,” Esperon was hopeful that Congress would approve the proposed amendments to HSA and thus consolidate the Anti-Terrorism Act.

ICHRP supports the Filipino people in their fight to defend their civil and political rights and oppose the weaponization of the law against its citizens. “This law will not in any way protect civilians from acts of terrorism, instead, it will only intensify the already deplorable human rights situation under the Duterte government,” says Mr. Murphy.

ICHRP calls on all freedom-loving peoples around the world to condemn the terror bill and pledges to garner more support for the Filipinos in resisting attacks and in defending their basic human rights.#