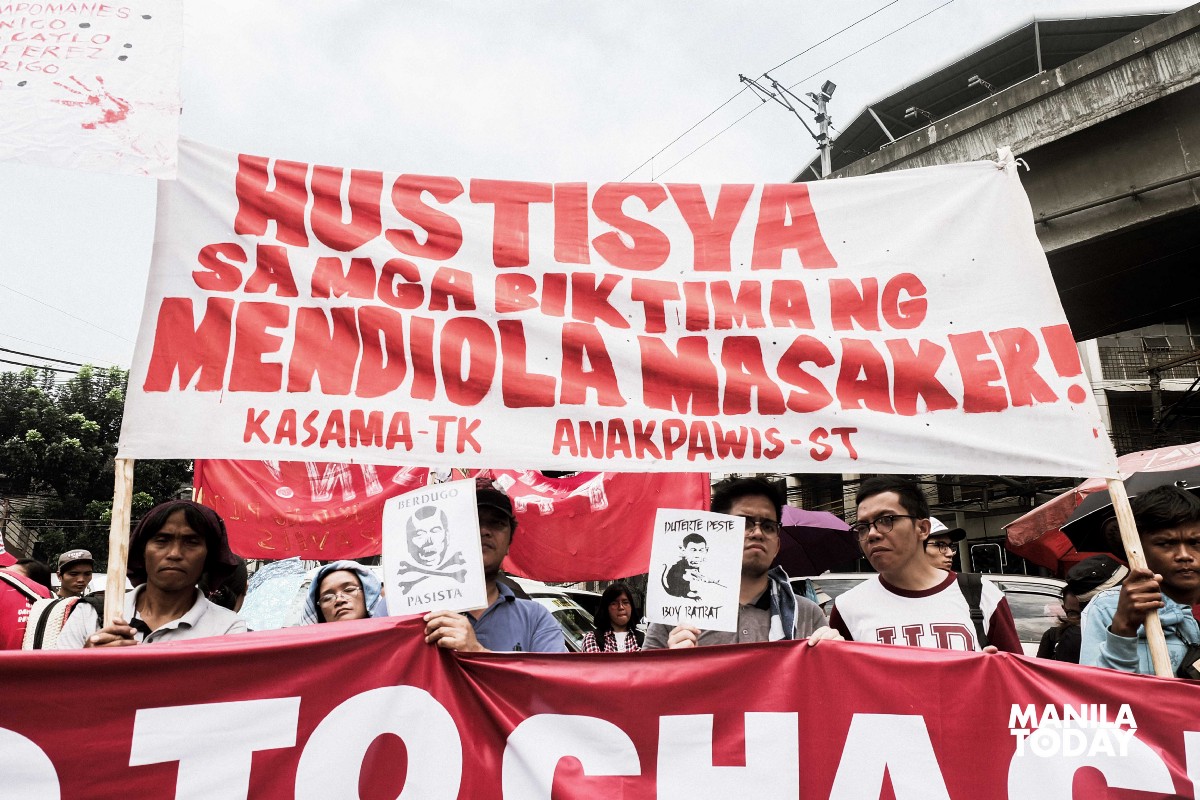 ICHRP Statement on the 35th Anniversary of the Mendiola Massacre

Today marks the 35th anniversary of a horrific crime perpetrated by Philippine state security forces against a peaceful farmers’ protest calling for land reform on Mendiola outside the Presidential Palace on January 22, 1987. The Mendiola Massacre clearly showed that the response of Corazon Aquino’s government to peasant demands for land reform was no different than that of her predecessor, the ousted dictator Ferdinand Marcos. In the intervening years, peasants have been continually denied the promise of land to the tiller. Every time they attempt to pursue their claims for land reform, they are attacked by state security forces and landlord goon squads.

Today, we remember the 13 martyrs who were struck down in the struggle for land reform at Mendiola: Danilo Arjona, Leopoldo Alonzo, Adelfa Aribe, Dionisio Bautista, Roberto Caylao, Vicente Campomanes, Ronilo Dumanico, Dante Evangelio, Angelito Gutierrez, Rodrigo Grampan, Bernabe Laquindanum, Sonny Boy Perez, and Roberto Yumul. These landless peasants stood for justice 35 years ago, peacefully protesting for the just claim of land to the tiller, but were instead given land six feet below the ground. They were struck down as military and police opened fire on crowds of protesters at Mendiola.

The Aquino government came to power on the coat tails of the popular People Power uprising against the Marcos Regime. Mrs. Aquino rightfully critiqued the Marcos agrarian reforms as a “mockery” and not “genuine” during her campaign against the dictator. Eleven months into her presidency, however, Aquino had made no progress despite the constitutional power to mandate a genuine agrarian reform program. Aquino left it to the landlord-dominated Congress to decide on the issue and the lack of progress did not sit well with the farmers.

Street protests led by the Kilusang Magbubukid sa Pilipinas (KMP) started on January 15, 1987, when the KMP camped outside the offices of the Ministry of Agrarian Reform in Quezon City. Among their demands were land to the tiller with no compensation and zero retention limits for landlords. The lack of progress on their demands for land reform eventually led to the march on Malacañang on January 22 involving about 12 to 15,000 protesters. They had marched to within about 50 meters of police and military lines, when the soldiers opened fire.

Among the protesters, 13 people died on the streets, and 39 were severely injured as a result of gunshot wounds. There are accounts stating that  another 12 to 19 additional protesters eventually succumbed to their wounds. Twelve more sustained minor injuries. According to some accounts, as many as 62 were injured. There were no one deaths on the other side of the barricade among police and military forces.

The massacre was a fascist attack on the people’s democratic rights, not even a year after the overthrow of the Marcos dictatorship. The casualties went beyond the immediate victims. The massacre sabotaged nascent peace negotiations between the National Democratic Front of the Philippines (NDFP) and the Aquino government. It was a sign that the increasingly powerful military established under the US-Marcos dictatorship would continue to be a looming shadow over the political process and would actively work to undo any threat to the semi-feudal semi-colonial system.

The Duterte regime has perpetuated violence against peasant land reform and peasant advocates. The entirety of his almost six-year repressive regime has seen widespread human rights violations perpetrated by security forces under Duterte’s “shoot-to-kill” and arbitrary arrest policies. This could be described as the Duterte Massacre. Philippine sources (Karapatan) have reported over 23,000 killed in the anti-poor War on Drugs, over 1,000 civilians killed in the War on the Moro People, and a sharp rise in political killings. As of August 2021, there have been 421 extrajudicial killings. Up to June 2021 there have been no less than 25 massacres documented by human rights organizations under the Duterte administration.

35 years after Mendiola the Philippines is a killing ground for alleged drug suspects, peasant activists, political dissidents, community organizers, indigenous peoples and human rights advocates. The Duterte Regime has institutionalized the killing of dissenters, placing human rights defenders and government critics and all those working to improve the lives of ordinary Filipinos in grave danger. As we mark a day of remembrance for the victims of Mendiola, ICHRP also denounces the ongoing human rights tragedy that has unfolded in the Philippines under the Duterte Regime.

On this the anniversary of the Mendiola Massacre we renew the call for land to the tiller, for genuine land reform. We call for an end to the regressive semi-feudal system in the Philippines that has institutionalized human rights violations.

Land to the Landless!