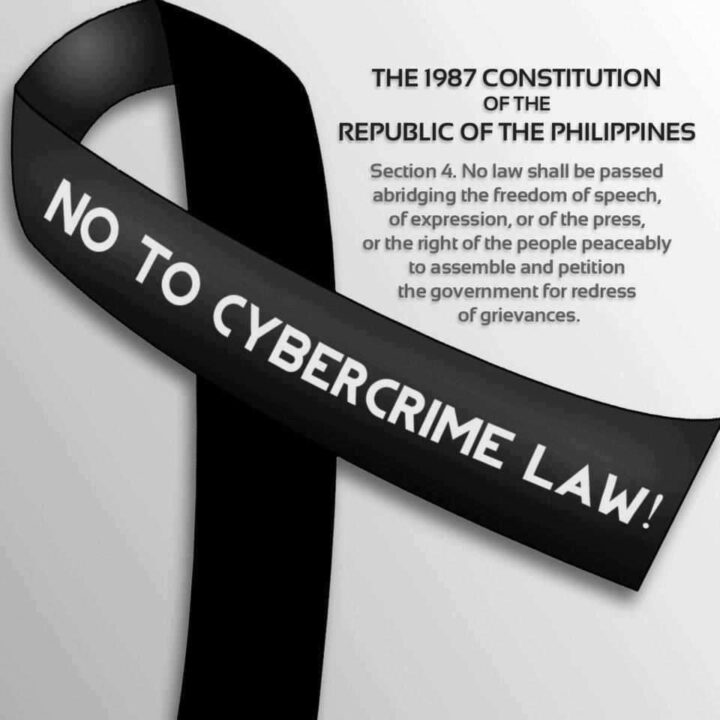 Press Statement, October 2, 2012 – Karapatan today joined activists, netizens, journalists, bloggers, organizations and individuals in a protest action in front of the Supreme Court, to call on the high court to declare the Cybercrime Law unconstitutional; as the measure, which is due to take effect on Oct.3, “poses serious threats to the right to privacy, freedom of speech and expression, among other civil and political rights.”

Members of the organization flashed tablets with electronic posters tagging the Cybercrime Law as a form of “e-martial law,” likening the law to the forms of suppression on civil and political rights by the military dictatorship imposed by former Pres. Ferdinand Marcos.

Cristina Palabay, Karapatan secretary general and one of those who filed a petition in the Supreme Court questioning the constitutionality of the Cybercrime Act, said that aside from the law’s provisions on libel, the said measure gives free rein on authorities to monitor internet traffic data of internet users and to take down sites which they deem “libelous.”

Karapatan, Bayan and other people’s organizations filed their petition yesterday.

“This has far-reaching implications on the work of human rights defenders, as this further impedes on our right to articulate the facts on the human rights situation that we gather on the ground and our analyses on the situation. This constitutes several violations of international human rights conventions and declarations, including the International Convention on Civil and Political Rights and the UN Declaration on the Protection of Human Rights Defenders of which the Philippines, as a signatory, has the obligation to implement,” Palabay said.

More importantly, Palabay said, this law infringes on the rights of the general public to access the facts and the information on several human rights issues and to express and act on their opinions.

“Online users go offline today to march on the streets against this Marcosian law. On the 40th year of the declaration of Martial Law, Pres. Noynoy Aquino should be reminded that the Filipino people have not forgotten the suppression of rights under the dictatorship and, what ‘Never Again’ means, and that is, we will relentlessly fight for the rights and freedoms taken away from us,” she concluded. ###